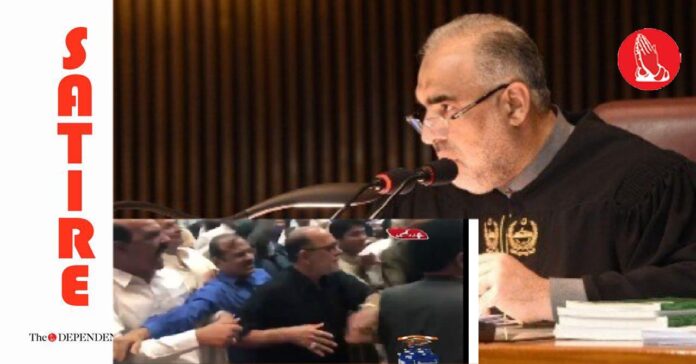 During his opening remarks, he expressed his gratitude to the treasury benches side for trying to quell the violence yesterday by throwing more books and budget documents than punches and eventually deciding even that was too extreme and resorting to ‘using their words’.

Addressing the house as a whole in the latter part of his opening remarks, Speaker Qaiser, while stating that there was no excuse for such hooliganism in parliament expressed how, “yeh left par beithay chor chu***** saara mahaul kharaab kartay hain”.

Later in the day Mr Qaiser, who had to go to the grounds of Parliament to officiate a ‘knives-only below the head above the groin’ fight to the death between Murad Saeed and Ahsan Iqbal, handed over  proceedings to the deputy speaker Qasim Suri, who upon taking his seat exhaled heavily and asked everyone, “haan bai da****, TYARRI HAI??”.

‘Only interested in cashing in on genocidal hatred against your religious community,’ Maryam schools Jemima

‘About to take over Pakistan with its consent’, confirms China

BEIJING/ISLAMABAD — Having been regularly penetrating Pakistan’s sovereignty with the country’s consent for at least the past six years, China is all set to...
Read more
NATIONAL

UNDISCLOSED LOCATION — The Taliban are willing to play in cricket stadiums in Gwadar and Gilgit-Baltistan, The Dependent has learnt. In conversations with the...
Read more
NATIONAL

BIRMINGHAM: Pakistan cricket team’s bowling coach Waqar Younis has congratulated his bowlers for replicating him. The fast bowling legend, and one of the greatest...
Read more
NATIONAL

LAHORE: The Punjab Curriculum and Textbook Board (PCTB) on Monday confiscated a social studies book for grade 7 published by the Oxford University Press...
Read more
- Advertisment -

July 15, 2021
UNDISCLOSED LOCATION — The Taliban are willing to play in cricket stadiums in Gwadar and Gilgit-Baltistan, The Dependent has learnt. In conversations with the...