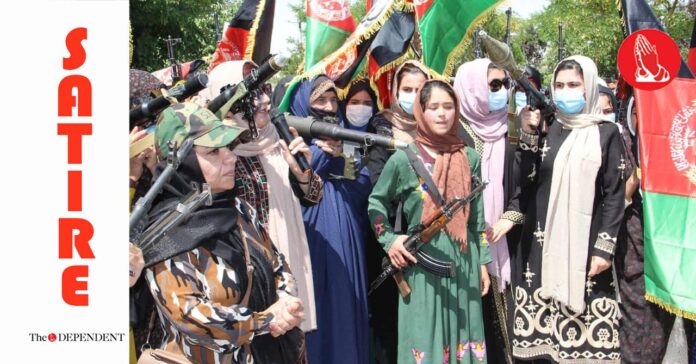 KABUL – Afghan women are displaying world-defying selfishness as they give preference to their own existence and sustenance, showing egocentric disregard for global plans devised by regional and international powers for Afghanistan’s future.

Hundreds of self-centered women have taken up guns in northern and central Afghanistan, marching in the streets in a show of defiance against decades-old strategies, developed by a wide range of stakeholders, which work for almost everyone except these women.

“We are ready to go to the battlefield,” said one protestor participating in the biggest demonstration in central Ghor province, loudly representing local women keen to safeguard their own self-serving interests at the expense of the world’s geopolitical interests.

“Never the Taliban, never,” said another self-seeking demonstrator in northern Badakhshan province, exhibiting a clear discard for the wishes of the global and regional powers, which would provide a convenient settlement in Afghanistan.

It is pertinent to mention here that the power sharing setup under consideration works for everyone else and will only cause a minor inconvenience to women who would just be asked to cease to be, either literally or essentially.

“Our mothers and grandmothers had to survive the previous rule, we won’t let another Taliban rule come to fruition,” said a young protestor in Kabul, continuing the stubborn, egoistic, desire to live their lives being passed on through generations of Afghan women.