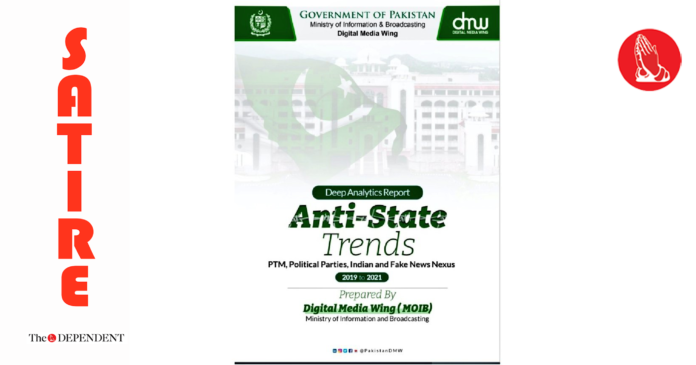 ISLAMABAD – The comprehensive and flawless, ‘Anti-State Trends Deep Analytics Report (2019 to 2021)’ put together by the nation’s top data scientists has unveiled the voices echoing anti-state narrative, unveiling the depth of the digital propaganda against the state.

Among those exposed by the report is the Twitter handle @KaaliDaal4PM, which, deep investigations carried out by digital sleuths have revealed, belong to the rider from the local utility store where Prime Minister Imran Khan gets his groceries delivered from.

“Another late night delivery – or is it early morning?” was the starting line of one of the many adult jokes posted by @KaaliDaal4PM, which have been listed in the ‘Anti-State Trends’ report, unearthing an international web of digital espionage, targeting the state through sixth generation warfare.

Sources privy to the data scientists that worked on the ‘Anti-State Trends’ report unveil that @KaaliDaal4PM shares even more 18+ jokes in his WhatsApp groups, which will be unveiled in the next report.

Scores of handles have been exposed by the report for spreading propaganda against the state. An entire section is dedicated to those spreading vulgarity to target the state, weaponising 18+ jokes.

All handles and defensive tweets using keywords surrounding the hashtag #18amendment have been listed as profare, anti-state, 18+ jokes.