Will speak up on missing persons when they’re abducted by jeans-wearing women: Tariq Jamil 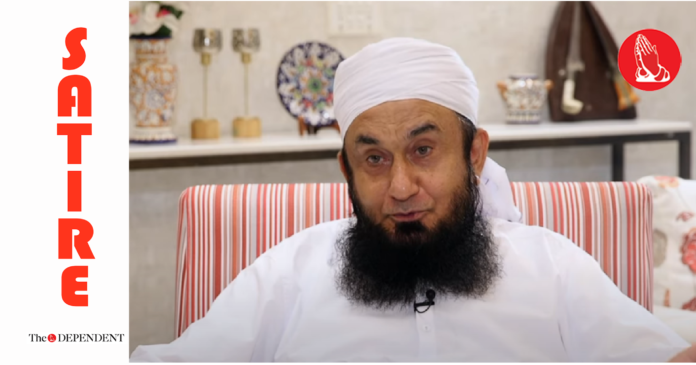 LAHORE – The topmost brand of the most lucrative industry in the country, Maulana Tariq Jamil has vowed to speak up on the issue of missing persons, the moment it is confirmed that women wearing vulgar clothes have abducted someone.

“Balochistan, [former] FATA, activists, academics, journalists— anyone who is abducted by a vulgar woman, will find in me a relentless voice of condemnation,” Maulana said while talking to The Dependent in an exclusive interview conducted in the aftermath of his interview with BBC.

“Whether jeans-wearing women are the victims or the perpetrators, I will always be the first one to condemn them. And, on national television, when given the opportunity. So let me know when the abductors are women wearing jeans, not men wearing plainclothes, or kha…” he added, before cutting off mid-word.

Further rebuffing some of the questions asked in the BBC interview, while talking to The Dependent, the maulana reiterated that he doesn’t condemn anything.

“Except vulgarity, immodesty, profanity — but all of these when applicable on women or the realm of religion,” he said.

“For instance, I don’t think anyone has condemned women who dance, and those who make women dance more vociferously, and more frequently, than I have,” the maulana added.

“If those behind abductions are also those making our women dance, I will condemn them in every khutba and every YouTube video.”

The scribe then proceeded to play ‘Pakistan Gayi’ from ‘Kaaf Kangana’ starring Neelam Muneer on his phone, at which point the interview was cut short by the maulana.