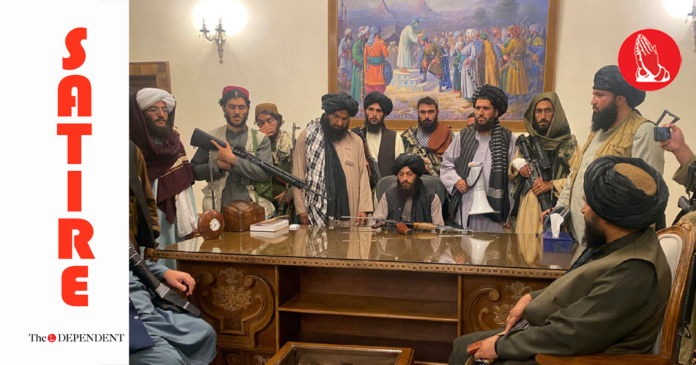 KABUL – Hours after taking over Kabul and suggesting talks with pro-democracy sections in the Afghanistan, the Taliban-led peace plan and nation-building strategy has failed, The Dependent can confirm.

The Taliban said on Tuesday they had canceled planned peace talks, designed to build Afghanistan through consensus after nearly two decades of war that has killed tens of thousands, with those supporting some form of human rights and popular rule. The talks failed over an agenda disagreement after the requisite middle ground could not be found.

Talks had been planned starting Monday, with the Taliban having already rejected requests from regional powers to reconsider their propensity towards totalitarianism, autocracy, violence, bigotry and human rights abuse.

“Some of the so-called moderate, but sinfully misguided ulema had even suggested ridiculous ideas like the reduction of 100 lashes to 50 – since that is the middle ground between 0 and 100. These are the same idiots who ask for wives to be ‘lightly’ beaten,” Baradar said.

Both delegations have revealed that deadlock also emerged between cutting hands for theft, and not cutting them, and decapitating people and not decapitating them.

“The Taliban say that—and we don’t know how to respond to this—if Pakistan, which has been over-enthusiastically involved in the negotiations, for instance, can have Hudood Ordinances—albeit revised —and laws mandating death for crimes of conscience, while still being a nation-state in the 21st century, why can’t Afghanistan under the Taliban,” revealed Afghanistan’s High Council for National Reconciliation Chairperson Abdullah Abdullah.

“They also ask what exactly is the middle ground between the divinely mandated and manmade.”