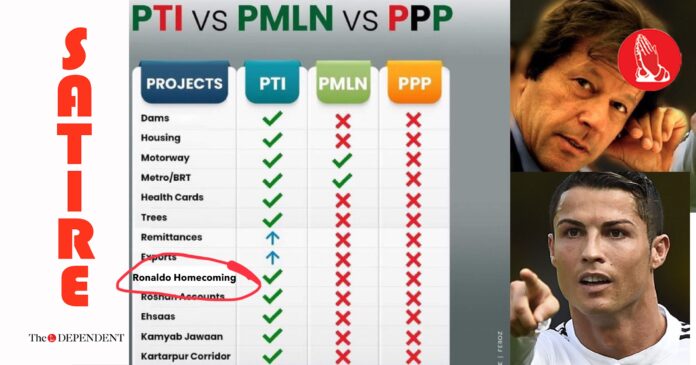 ISLAMABAD – The official Twitter handle of the ruling Pakistan Tehrik-e-Insaf (PTI) has tweeted further data on the performances of political parties and reminded the nation’s Manchester United fans that it is under Imran Khan’s leadership that football legend Cristiano Ronaldo has returned to Old Trafford.

“Ronaldo left in 2009 when PPP was in power. He has nowreturned to Old Trafford just as Pakistan Tehrik-e-Insaf completed three years in power #CristianoIsBack #HesComeHome #VivaRonaldo” tweeted @PTI official tagging @ManUtd and other Twitter handles affiliated with Manchester United in Pakistan.

Observers note that Manchester United fans constitute a major demographic in Pakistan. Leading experts say that Ronaldo’s signing is a significant coup for PTI, and will boost their chances of winning the 2023 elections.

“While it was under PPP that Ronaldo left, Manchester United fans wanted Ronaldo to return from 2013 to 2018 as well, but he did not do it under PML-N,” said renowned analyst Irshad Bhatti.

“It is due to Imran Khan’s honesty that Ronaldo has decided to come back to Manchester United,” he added.

While the PTI has been quick to remind the Manchester United fans its role in bringing Ronaldo back, the party has also been humble enough not to hog all the credit.

“Let’s not forget that Ronaldo’s development as a world class player at Manchester United, punctuated by the League and Champions League double in 2008, came when Pervez Musharraf was president,” said senior PTI leader and Minister for Water Resources Faisal Vawda.

Meanwhile, sources within the PML-N have confirmed that Ronaldo’s return to Old Trafford is motivating prodigal son Nawaz Sharif’s return to Jati Umra.