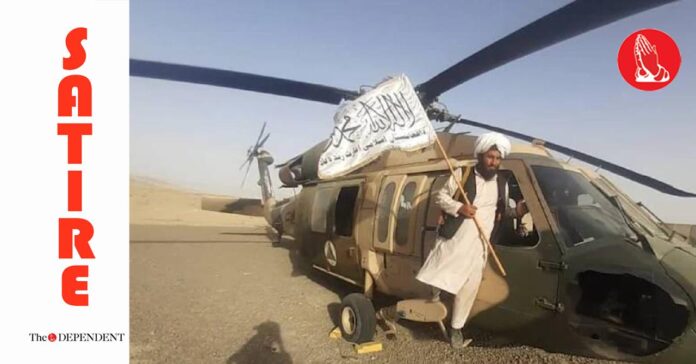 The United States of America, a country located in North America between Canada and Mexico, has on Tuesday been placed on the so called ‘blacklist’ of the Financial Action Task Force (FATF) after clear evidence has emerged of its government providing a terrorist organisation some sophisticated military hardware and other capital.

“We had already intimated (USA’s) head of government Joseph ‘Joe’ Biden of our decision a couple of days ago and finally implemented it today,” said FATF President Marcus Pleyer, while speaking to reporters. “It was a tough decision as I know it hurts the poor citizens of a country but it had to be done.”

The American government, whose links with the antecedents of the terrorist organisation go back almost four decades, was recorded as providing the Afghanistan-based ‘Taliban’ a host of advanced military hardware including US Airforce Blackhawk helicopters, the Soviet-made Mi-17 helicopters, US Army issue HumVee’s, several batteries of artillery cannons and huge arsenals of light firearms. All this, in addition to easily negotiable commodities which could be sold in the open market for raise cash for the said organisation.

“I am glad the FATF took this decision, because this action of the US has made it very difficult for my government to fight this terrorist group,” said Acting Afghan President Amrullah Saleh, while speaking to himself in a room.