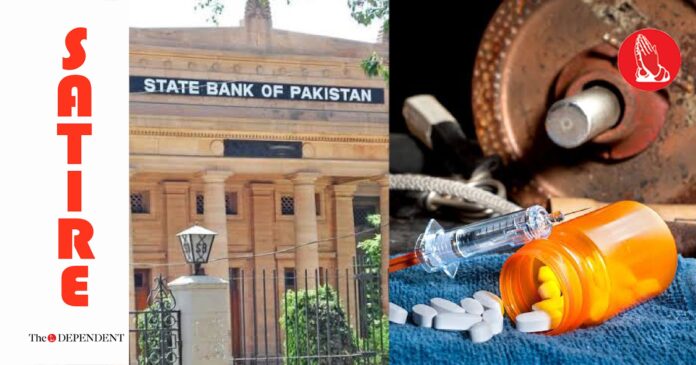 A nervous State Bank of Pakistan has injected an as yet undisclosed number of millilitres of steroids into the money markets to strengthen the Pakistani rupee against the US Dollar.

The move follows the central banks’s earlier, unsuccessful injection of $1.2 billion dollars into the markets to achieve said results.

A man seen outside SBP’s gym told Governor Reza Baqir as he was leaving that if he wants quick results, there was no other option.

“Bhai, I have been seeing you struggling for some weeks now but there have been no results,” said the man, who goes by ‘Kashi Butt’ to the central banker. “Aap Aisa karo, merey se ye sheeshi purchase kar lo, aur phir dekho kamal aik haftey mein.”

“Hrithik, Salman, you name it, they all do it. In fact, so does Momi.”

After assuring Baqir that the approach was absolutely safe, the SBP made an acquisition of said sheeshi as per PPRA rules and injected its contents into the money markets.

According to sources Baqir is still struggling as the rupee has shown no observable difference in muscularity.

Meanwhile, the Finance Division has sent an enquiry paper to the central bank, asking why the rupee was still not stable despite the government spending $1.2 billion + Rs 3250/-