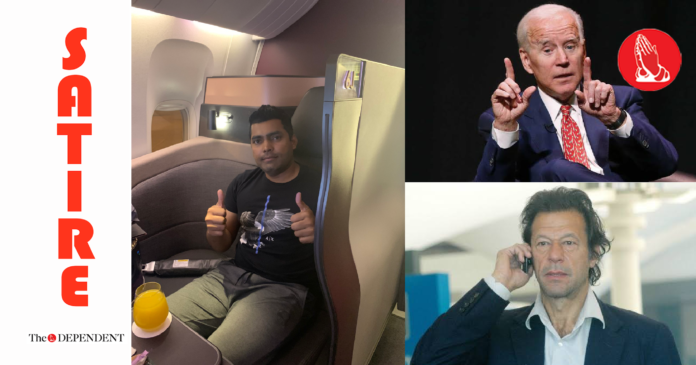 LAHORE/WASHINGTON – The ‘personal meeting’ that sidelined Pakistani cricketer Umar Akmal is set to have in the US is going to be with President Joe Biden, The Dependent has exclusively learnt.

Akmal who left for the US today, hinting at a new role in America, is all set to be appointed ‘Special Advisor on Chipku Lahori Boys’.

“I am travelling to US for some personal meetings if all goes well I might have to stay there for some time! I need my supporters to pray for me like they have always prayed!” tweeted Umar Akmal from his flight ahead of his new appointment in Washington, which is all set to be officially announced on Monday.

Special Advisor on Chipku Lahori Boys is the latest of around 4,000 positions in the Executive Office of the President of the United States. It has been created by the Biden regime to address a diplomatic challenge in an increasingly volatile South Asia region.

While the creation of the position might require Senate confirmation, the senior policy staff at the White House are confident that Akmal’s appointment will pose no legal challenges given the matter is of national security to the US.

“Mr Akmal will take charge immediately upon arrival and help President Biden decode an enigma in South Asia that is damaging American interests in the region,” White House Chief of Staff Ron Klain said while talking to The Dependent.

US officials say that Umar Akmal has been appointed owing to his epitomisation of the precise kind of stereotypical Lahori Boy behaviour that is now a matter of geopolitical concern for Washington.

“Mr Akmal brings to the table unmatched experience in personifying the puzzles that we are now confident of resolving under his advice,” US Secretary of State Antony Blinken told The Dependent.