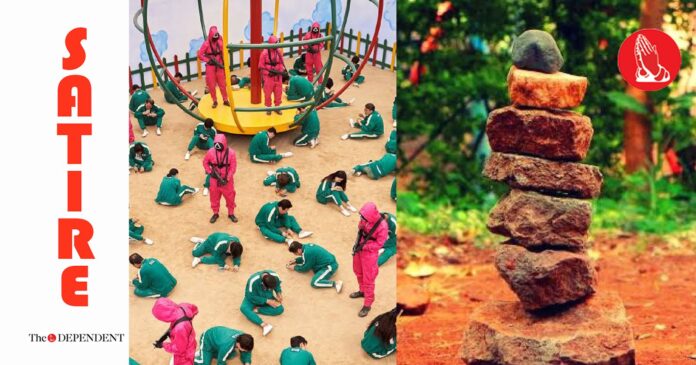 UNDISCLOSED LOCATION: Parallel to the Squid Game being contested on an isolated South Korean island, a Pakistani version of the game has also been ongoing for years, The Dependent has exclusively learnt.

Exclusive video footage of the Pakistani Squid Game has been obtained by The Dependent’s investigative correspondent, who called the visiting card given to him and agreed to participate in the game owing to the bleak future of journalism in Pakistan.

Details obtained from the ongoing 2021 edition of the Pakistani Squid Game confirm that around four-and-half times as many contestants as the South Korean version were selected for the first round, in line with the population ratios. The Dependent’s correspondent is contestant number 1992 out of a total 2018 participants.

The first round of Pakistani Squid Game saw the desi rendition of the South Korean version, along the lines of Aankh Macholi. However, the correspondent, who survived the first game as expected, confirmed that negligible contestants were killed in the first round since no one wanted to go back to Naya Pakistan.

“No one wants a vote either because we know better than to trust the transparency of electoral process,” a contestant told the correspondent.

It has been further observed that contestants have divided themselves along political lines, with supporters of PTI, PML-N, PPP and others grouping to form teams in the large hall where everyone is staying.

A major contention point between the various divisions has come regarding the identity of those running the Pakistani Squid Game, with claimants broadly divided between those who believe that the military establishment is behind everything and those who don’t.

The second round of the Pakistani Squid Game saw contestants being asked to play Pitthu Garam with hand grenades and shrapnel, with further additional twist requiring players to also use the shrapnel created in the grenade blasts to build the tower.

“It’s not much different to how things were in Pakistan a few years ago, with blasts and attacks everywhere,” said one of the 1999 contestants still remaining in the game after two rounds.

Other contestants also say that they’re so used to terrorism that they’ve become sensitised to violence, which is a major reason only 19 players have been eliminated so far.

While the contestants haven’t officially been told what the next games are going to be, sources with access to the backrooms claim that Namaloom Kokla Chhapaki, Encounter Kho Kho, IED Ludo, Kalashnikov Kish, Gullu Danda, Chicho Cheech Cheekhaan and Yassu Panju Haar Kabootar Dhamaka are some of the suggested games.

It is pertinent to mention here that The Dependent’s correspondent is simultaneously participating in the game, while risking his life to obtain evidence for reporting.

The Dependent’s generous editorial board has announced a promotion for the correspondent if he comes out of the game alive, and will consider his time over there as paid leave.