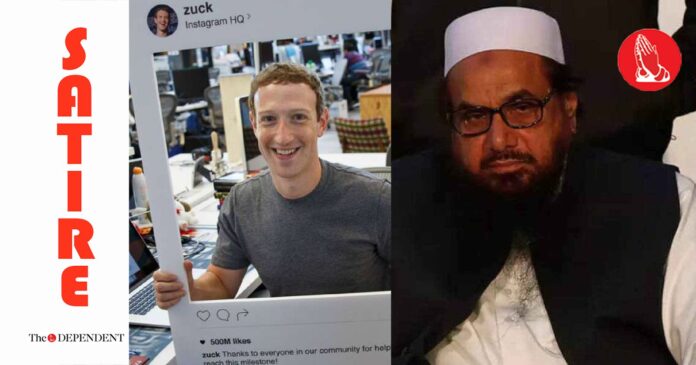 MENLO PARK/MINTO PARK: Ahead of Facebook Chief Executive Officer Mark Zuckerberg’s planned discussion regarding changing the name of the platform at the Connect conference on October 28, the founder of the social media giant held a virtual meeting with Lashkar-e-Taiba (LeT) CEO Hafiz Saeed.

Sources privy to the Facebook video call between the two trailblazers of their multinational corporations have informed The Dependent that Zuckerberg has offered to outsource the rebranding strategy document to the LeT marketing team, with Facebook set to be renamed as ‘Lashkar-e-Zuckvi’.

“Lashkar-e-Taiba, Jamaat-ud-Dawa, Falah-e-Insaniyat Foundation, Milli Muslim League, Allahu Akbar Tehreek… the names are endless, when it comes to brands that you have launched from basically the same organisation, offering essentially the same services,” Zuckerberg said while making his offer to Saeed, sources confirm.

“This is not the same as Facebook purchasing Instagram or WhatsApp, your model is more indigenous, more natural, more organic. Perhaps Facebook Messenger stemming from Facebook comes close, but they still have the same brand name, which is what we want to readdress — and which is where you come in!” Zuckerberg added.

Sources further confirmed that Zuckerberg told Saeed that Facebook wants to learn from Lashkar-e-Taiba because the two companies have so much in common.

“Essentially social media and militant jihad are quite similar in how they can be damaging and a constant source of aggression and division — once you’re hooked, you’re hooked. You want to kill everyone, but you’ll eventually start hating yourself, questioning why you’re in it at all, but you can’t live without it,” the Facebook CEO said.

Sources confirmed that the agreement was signed between Zuckerberg and Saeed, after the latter expressed interest in the project, and expressed hope to learn things from Facebook as well.

“While you’ve already highlighted the fundamental similarities between Laskhkar-e-Taiba and Facebook, I too want to learn how to keep my users constantly engaged and connected, instead of just logging in once in a while for a cross-border raid,” Saeed told Zuckerberg.

While Lashkar-e-Zuckvi was finalised as the new name, sources confirmed that other names such as Jamaat-ud-Drama and Tehreek-e-Tantrumaan were also shortlisted.