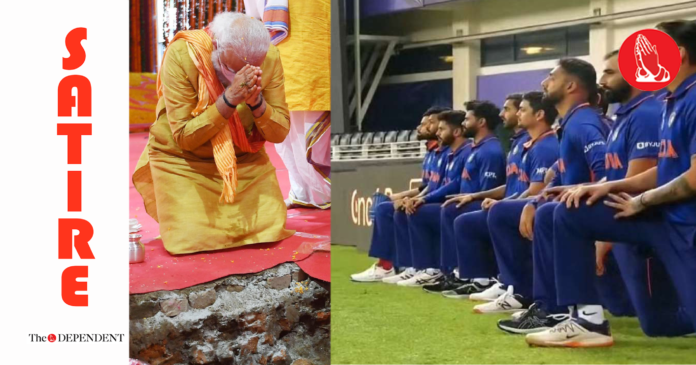 AYODHYA – Little over 14 months since the start of the construction of a temple on the site, Prime Minister Narendra Modi on Tuesday decided to make yet another statement at Ayodhya by taking the knee in unison with the Indian cricket team at the ongoing World T20 in the United Arab Emirates.

Calling it the “dawn of a new era”, Modi said that he, and in turn the entire country of India, stands firmly against racial discrimination.

“Black lives matter. Without a shadow of a doubt. It is a shame that we even have to say this in the year 2021. The world has moved forward but remnants of white supremacism continue to mar the US and most of the Western world,” Modi said while talking to the media after taking the knee in front of the press and his personal photographers.

Choosing the temple as the site of the gesture which athletes in the US first demonstrated as a symbol of protest against racial inequality in America, Modi maintained that there is no better place than Ayodhya to express views regarding righting the wrongs of the past.

“Today, all of India will take a knee and raise a fist in support of racial equality and the Black Lives Matters movement. We won’t let George Floyd’s death be in vain. We will all continue to fight for a just and equal America,” Modi maintained.