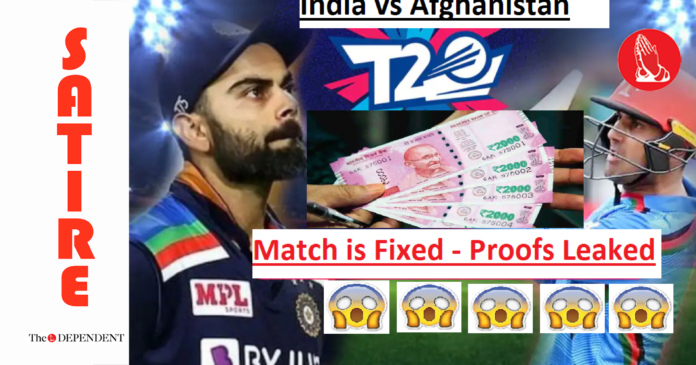 CONPIRACYPURA — After a series of to-and-fro neural motions over the past couple of weeks, the nation’s cricket theorists finalised their group stage fix, The Dependent has learnt.

After failing to nail down the exact dynamic of how the group stage of the ongoing World T20 was fixed, the theorists finally understood what has been transpiring after the semifinalists were decided.

The fact that Afghanistan cricket team had taken money from India to do something was certain, confirmed the cricket theorists’ subconscious while talking to The Dependent, it was to do exactly what, that was yet to be decided.

“India actually paid Afghanistan to lose against New Zealand [on Sunday] since Pakistan had said before the tournament that they actually wanted New Zealand to be knocked out even more so than India,” said the theorists’ subconscious, confirming the final theory that had been settled on, at least as far as the group stage of the tournament is concerned.

“We have all the recordings, videos, body languages, that confirm this. It is a shame how India is doing everything in its power to target India — even if that means playing poorly and getting itself knocked out so that our pre-tournament enemy New Zealand qualifies,” the cricket theorists’ subconscious added.

“Let’s not forget that this also confirms that India paid India to lose against New Zealand. Maybe it paid New Zealand to win all its other matches as well,” the subconscious maintained.

At press time the subconscious was figuring out whether it really wanted New Zealand to exit, instead of India, realising that agents of Research & Analysis Wing (RAW) were in its midst, not only paying others to undertake anti-Pakistan activities, but also to figure out what Pakistan wants, even before Pakistan figures it out.

- Advertisement -
Facebook
Twitter
Linkedin
WhatsApp
Email
Previous articleSilent Guardian Zaid Hamid moves on to Sixth Generation Warfare after quietly winning the Fifth
Next articleGovt negotiating with ASWJ on number of policemen they have to kill in order to be unbanned: Fawad