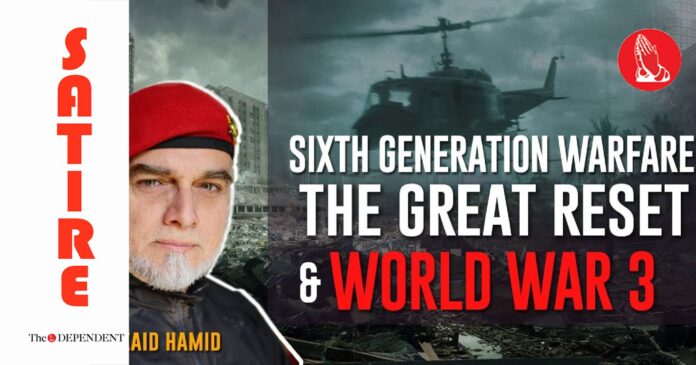 Zaid Hamid, the last hope for Ghazwa-e-Hind, who has stealthily protected this nation from all evil for over four decades, announced that he had won the Fifth Generation Warfare on his YouTube channel.

The war triumph, declared with characteristic humility and quietness, accompanied the announcement of the commencement of both the Sixth Generation Warfare and the Third World War.

To independently verify the claims of victory and the beginning of the next wars, The Dependent’s investigative team brought forth conclusive answers by asking Zaid Hamid if what he says is true.

“Of course it’s true. You don’t see our flag on the Qutub Minar because the warfare has moved into arcade realms. On the virtual Qutub Minar, I myself @DelhisDaddy65 planted the flag in March,” Hamid told The Dependent, in turn confirming that he did indeed win the Fifth Generation Warfare all alone.

The silent guardian further revealed that after winning the Fifth Generation Warfare the Sixth immediately started.

“They began the next level immediately. So I rushed to save changes, because I am a warrior from the times when this didn’t happen automatically,” confirmed Hamid, whose avatar dons the trademark lal topi as he marauds inside enemy territory atop a divinely sanctioned steed.

“There’s cross-platform play, and you quickly move from first-person shooter to multiplayer online battle arena. Right now I’m in the midst of a massively multiplayer online role-playing game, and my role is to protect this land of Iqbal’s shaheens,” he said.

“I’m the hero you need. But not the one you deserve.”