Shoaib Malik to do next bold photoshoot with Maulana Tahir Ashrafi 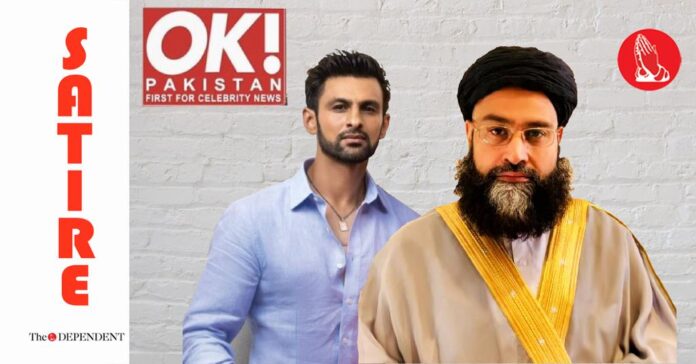 DUBAI/ISLAMABAD: Veteran all-rounder Shoaib Malik has agreed to do his next photoshoot with Special Representative of the Prime Minister on Religious Harmony Maulana Tahir Ashrafi, The Dependent has learnt.

Sources confirm that Malik, who has been preparing for Thursday’s ICC Men’s World T20 semifinal against Australia, will feature together with Ashrafi on the front page of a leading lifestyle magazine next month.

The editorial team of the magazine has informed The Dependent that the shooting will begin following the completion of Pakistan’s participation at the Cricket World Cup. However, the editors and photographers were mum on the theme of the shoot.

“All we can say is that it is going to be bolder than anything that you’ve seen on the front page of any Pakistani magazine,” said one member of the editorial team.

Sources close to both Malik and Ashrafi have revealed that the duo are excited about what they both deem to be an ‘experimental project’.

“Such photoshoots are all about the comfort level that the two people have with one another, and in that regard [Shoaib Malik] is pretty confident that he’ll have the right chemistry with Maulana Ashrafi,” said a member of Shoaib Malik’s PR team.

Those close to Maulana Ashrafi have also expressed excitement with regards to the photoshoot.

“Maulana only recently said that Pakistan has so many good looking men. Now one of them is featuring with some cricketer,” said one aide to the maulana.