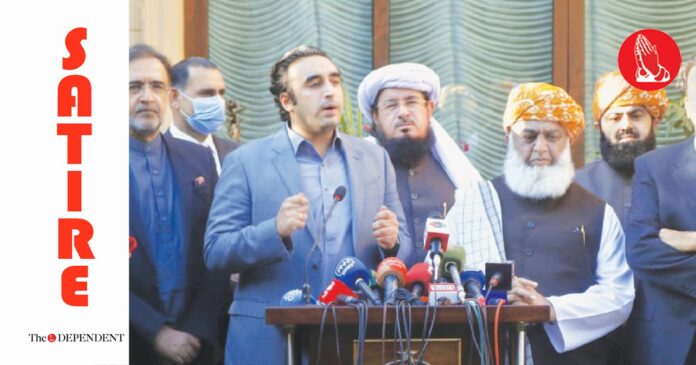 The PPP chairman conveyed to the PDM chief that he now felt especially equipped with regards to taking the government to the task.

“As you would know so well, maulana saheb, much of the focus of the PPP in recent month was to party prove that it can be a much better opposition to the opposition than the Pakistan Tehrik-e-Insaf,” Bilawal told Fazl, sources privy to the meeting have informed The Dependent.

Bilawal confessed that he was hoping, and still does in large part, that it would be his party’s turn to benefit from the kindness and justness of the selectors.

“But as I have said all along, and with so much experience to back this: let’s first get the current selected lot out of the way, and then we can all compete to be the next to be selected,” he added.

“And of course for the PPP and the JUI-F [Jamiat Ulema-e-Islam Fazl] it could even mean just being selected in our select spheres of influence.”

The development comes months after the PPP and the PDM had parted ways, largely over breaking the queue within the opposition alliance, when it comes to wooing the selectors. In March, the PPP chief had even sent an encrypted message to the chief selector.

“Given that the adjudication is based on who can oppose anyone opposing the selectors, I feel the party, and indeed myself as its chair, has done a commendable job in recent months to fulfill the criteria,” Bilawal said in the encrypted message, a decoded copy of which is available exclusively with The Dependent.

“Yes, we all saw that the PTI has been a very vocal opposition to the opposition, but we all know that they’re more words than actions. Needless to say the PPP has done more to cause actual damage to the opposition than the PTI, while at the same time, offering the best of trash talk as well,” the message added.

- Advertisement -
Facebook
Twitter
Linkedin
WhatsApp
Email
Previous article‘Bhai back on the walls of Karachi,’ tweets Nadeem F Paracha after writing Jiye Altaf Bhai on wall in Karachi
Next articlePut me out of my misery once and for all, says Hammad to Shahzeb while handing him Glock