Put me out of my misery once and for all, says Hammad to Shahzeb while handing him Glock 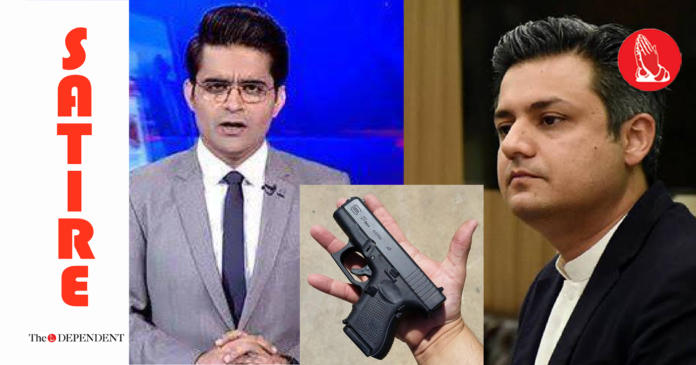 “I can’t bear going on your show again and you-know-who says I must,” he said to Shahzeb, while intercepting him outside his home when he was taking his early evening walk.

“Take this, and be careful, it’s loaded,” he said, while handing over a Glock pistol to Khanzada. “Just make it quick.”

“The alternative is something I can’t bear anymore,” he pleaded to Khanzada. “The clips are going to go viral, patwaris are going to stitch those clips with my own statements made on your program. That is, if your own producers don’t do it already.”

“And of late, even the party support base doesn’t defend me anymore,” he said.

“Please, I beg you, finish me,” said a teary-eyed, shivering Azhar.

“No,” said a cold-eyes Khanzada. “You’re coming on my show.”

- Advertisement -
Facebook
Twitter
Linkedin
WhatsApp
Email
Previous articlePPP ready to be opposition to govt after being successful opposition to opposition: Bilawal
Next article‘At $3b/fortnight only need $156 billion to keep rupee at 170 for next 2 years,’ Imran tells MBS