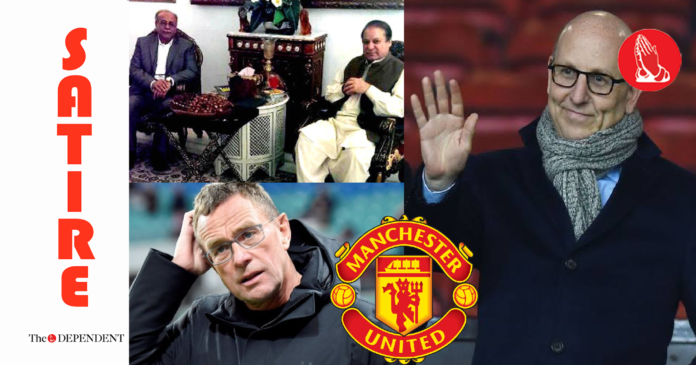 MANCHESTER – Leaders of Pakistan Muslim League Nawaz (PML-N) have proposed Najam Sethi as the caretaker manager of Manchester United, The Dependent has learnt.

Sources confirm that the representatives of the Sharif family met with the Glazers late Thursday night, after media reports surfaced that Ralf Rangnick was all set to be named as the interim manager of Manchester United.

In a meeting with Joel Glazer, the top brass of PML-N recommended Sethi as a reliable hand until a more permanent manager can be found.

Sources recounted that the PML-N leaders advocated for Sethi based on his experience as book publisher, anchorman, sociopolitical analyst, helicopter pilot and most of all as caretaker of Punjab government and the Pakistan Cricket Board.

“If Najam Sethi can handle Punjab police during the late 90s, he can definitely handle [Cristiano] Ronaldo and [Paul] Pogba in the same side,” PML-N supremo Nawaz Sharif told Joel Glazer during their meeting on Thursday.

Further, sources within the PML-N reveal that the move to forestall the move of German football coaching guru Rangnick to Manchester United has actually come from the camp of Shehbaz Sharif, whose affiliation with Liverpool Football Club is known to all.