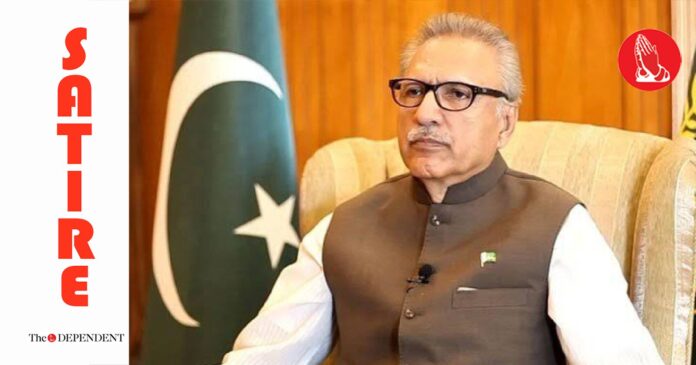 ISLAMABAD – Visibly emotional, President Arif Alvi on Tuesday thanked the nation for believing that he had the power to pull strings and get favours done for his family. “Thank you, all of you. You were here for me and believed in me when no one else did. Not even my family,” he said.

The address, which was made by President Alvi inside his head while he swiveled around on his chair behind the President’s desk, was punctuated by sobs, tears, and hiccups.  “The fact that people actually believe that I managed to hook my son up with the right contacts and get him a $25 million MoU with an American company is so utterly touching that I haven’t been able to process it yet.

According to details, the President had initially asked to address the nation on PTV. The President had made three attempts to call the PTV offices in Islamabad, and while his call was picked up on the third attempt, the line was cut by the intern at reception on the other end. However, adamant that the nation should hear from the symbol of the federation, President Alvi decided to speak to the nation through his internal monologue.

“Of course, I did not have anything to do with the MoU. In fact, it is a miracle I even made it there. My son had actually accidentally told me it was at 7PM when it was actually at 5PM. But luckily for him, I had a slow day at work and managed to get there at 9AM. I even helped the catering staff setup,” he said. “But I really appreciate that people think I can get this sort of thing done,” he said with a slight quiver in his voice as a single tear rolled down his cheeks.

Meanwhile, the speech was almost interrupted by commotion from outside the President’s office where his family was embroiled in a disagreement. “Mom, he already came to the MoU signing. Why does he have to be at my birthday also,” Awab Alvi could be heard saying to his mother outside. “It’s so embarrassing,” he ended.