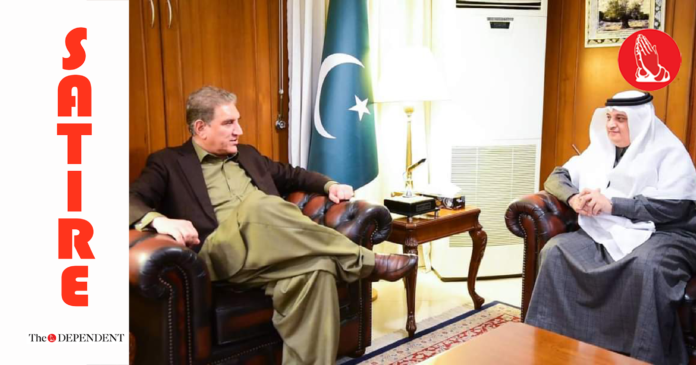 ISLAMABAD – Responding to the comments over his seating position a meeting with Saudi ambassador Nawaf bin Said al-Malki, Pakistan Foreign Minister Shah Mehmood Qureshi has informed the Saudi embassy that his posture was designed to cater to his guest.

In an official message sent to the embassy, Qureshi has written that sitting with one leg crossed and the other pointing in al-Malki’s direction was to give his guest closer access to his feet.

“No, it is okay that you didn’t touch them in respect, and it is also alright that you didn’t bow down to me as I am accustomed to, especially when seated like that, in my spiritual zone. But just for your information, devotees kiss the feet that were pointing towards you Mr al-Malki,” reads the message written by Qureshi, a copy of which is available with The Dependent.

“I can assure you that in no other diplomatic meeting in your life would you have ever come in such close proximity to divinity. If you missed the chance to touch spiritual bliss, that’s your loss, but as the Pakistani foreign ministry’s gaddi nasheen I offered you the best possible opportunity,” the message further adds.

However, the Pakistani foreign minister insisted that while matters of faith and devotion should always reign supreme, diplomatic ties shouldn’t be tarnished by diplomats’ inability to properly conduct themselves.

“No, it’s alright, you don’t have to apologise for literally sitting two feet from my two feet and not even trying to touch them,” Qureshi insisted.