After getting govt for one day, I’d want a wrist gadget that makes me go invisible: Siraj-ul-Haq 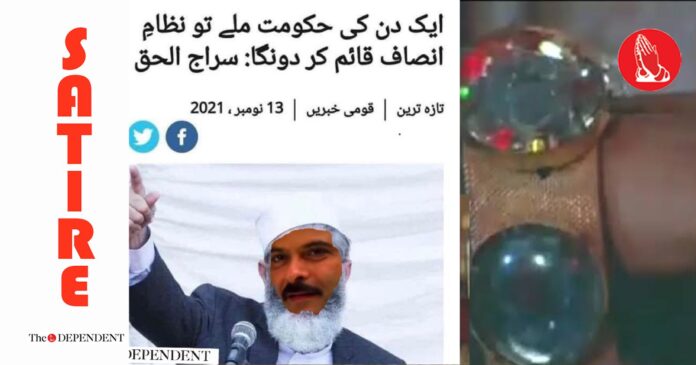 ISLAMABAD: Jamaat-e-Islami (JI) Ameer Siraj-ul-Haq maintains that his party is all set to take charge of the government, but for that he needs a few preconditions fulfilled.

In an exclusive interview with The Dependent, the JI chief reveals that in addition to being given a trial government, there are other things that are needed to ensure his party’s success.

“After being given charge of the government for one day, I will fix inequality and poverty. That I will do by becoming the host of a game show that would make slum dwellers millionaires,” Siraj shared exclusively with The Dependent.

Further elaborating his plan, the JI chief says that his ultimate goal is to make sure that everyone in the country becomes free, despite over seven decades having passed since Pakistan’s freedom.

“True freedom for all of us will come if I go back to 1942 and after expelling the then colonialists, also go on to rid the nation of the colonialists that follow. Today, this is only possible if we all become identical twins that reflexively feel each other’s pain,” he further elaborated.

After detailing what seemed to this scribe a plan to travel back in time, the JI chief made a clear sci-fi desire by highlighting the need for a device with superhuman powers.

“After all the aforementioned conditions are fulfilled, I also plan on getting a wrist gadget that makes me go invisible,” Siraj said, adding that once he wears the gadget no one would see him lifting and transporting objects, or smacking bad guys, since he would be invisible to everyone under all conditions.

“Except when exposed to red light,” the JI ameer clarified.