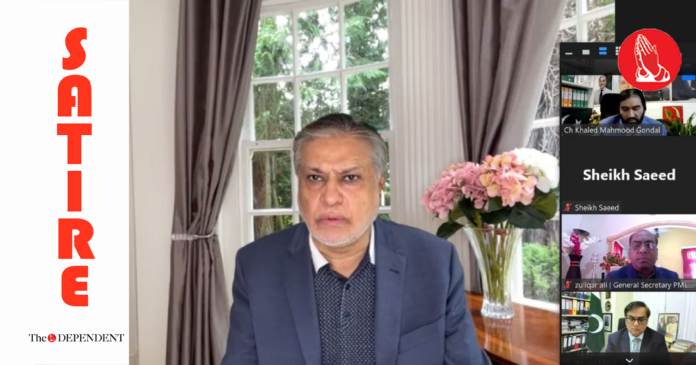 LONDON – Senior Pakistan Muslim League-Nawaz (PML-N) leader and former finance minister Ishaq Dar has said that after winning the next general election, his party will rule the country virtually from the United Kingdom.

Talking to The Dependent, after writing a letter to Senate Chairman Sadiq Sanjrani, expressing his willingness to take his oath as a member of Senate virtually, Dar maintained that Article 255 (2) of the Constitution can be interpreted to allow for a government to run the country remotely.

“Just like me, the PML-N is also undergoing a prolonged illness and ongoing medical treatment,” Dar told The Dependent.

“Therefore, once the Election Commission of Pakistan notifies the PML-N’s victory after the next election, the party should also be allowed to run the country via video link from London,” he added.

Dar said party supremo Nawaz Sharif is already in London, and preparations are ongoing to ensure that the entire party virtually moves there and then uses the latest digital technologies to implement the governance that ‘it takes pride in.’

“We are already enhancing Zoom subscription plans along with asking WhatsApp to create new group mechanisms for a party to run a country of over 220 million people remotely,” Dar revealed.

“Also, we have signed up YouTubers, Instagrammers, vloggers, influencers, social media managers and other digital media experts, without whom nothing can be done virtually – including, of course, running a country via the internet.”

- Advertisement -
Facebook
Twitter
Linkedin
WhatsApp
Email
Previous articleHolder of PM portfolio gets highest marks in PM’s ministers’ performance review
Next articleI play all the balls so that you don’t see how shi*ty everyone else is: Babar Azam