I play all the balls so that you don’t see how shi*ty everyone else is: Babar Azam 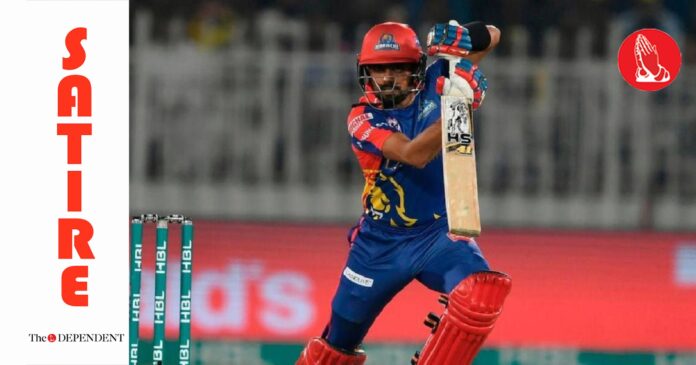 LAHORE – Reacting to the sixth successive defeat of Karachi Kings in the ongoing Pakistan Super League (PSL) captain Babar Azam said he looks to play as many of the allotted 120 balls in the innings as possible so that the viewers don’t have to endure the batting of the rest of his team.

Speaking to The Dependent after the mammoth 55-run loss against Peshawar Zalmi at the Gaddafi Stadium, Babar said his first and foremost priority is to shield his teammates.

“No matter which team I play for, I start off with the assumption that the less you get to see the rest of them the better, for which reason I have to stay at the crease as long as possible. I play all the balls so that you don’t see how sh*tty everyone else is, or might be,” said the skipper of Karachi Kings and the Pakistan national team.

“And I have been playing this tournament with the same approach, and hence have numbers similar to those that I always have,” Babar added.

Babar conceded that it’s not easy to do what he does and a lot of sacrifice goes into putting in place the consistent template that he always produces.

“Sometimes I play a mind-blowing innings, such as the record chase in South Africa, which shows you that I too can play aggressively,” he said.

“However, I have to stop myself from taking that approach consistently, so that I continue to do what I have been doing: protecting you from watching other batters in my teams.”