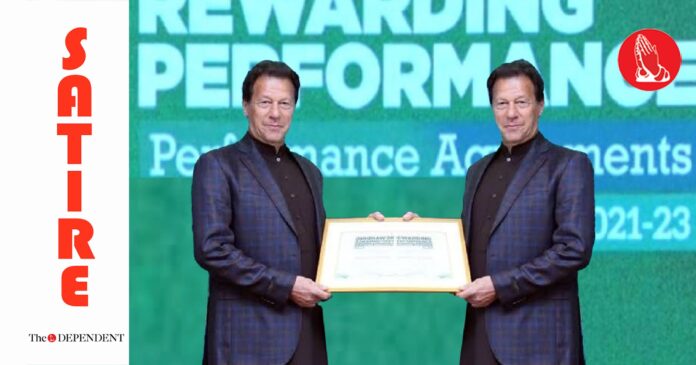 The ceremony, which was held the night before Thursday’s official ceremony to recognise the top 10 best performing ministers, started at the PM House at 10:30am on Wednesday and continued till 11 pm.

Sources confirm that it was designed to inform the various ministers about their shortcomings and adjudicate their performances in separate, individual meetings.

After living up to his claims that accountability would begin with himself, PM Khan spent the majority of the entire day that had been allocated to review the performance of ministers, reviewing his own performance as the Prime Minister.

“And hence, as has been conveyed to you over the past elevenand a half hours, Prime Minister Imran Khan was outstanding in his role, with all the tasks allocated to him being brilliantly executed,” noted PM Imran Khan after concluding the 29th and final PowerPoint presentation reviewing the performance of the Prime Minister at around 11 pm local time.

After spending almost 12 hours holding himself accountable, Prime Minister Khan told the remainder of the time telling every ministry and division how they could learn from his example.

“They were told this in individual meetings, and then later collectively as well, after which the report cards for each minister was filled and handed over,” a source privy to the ceremony told The Dependent.