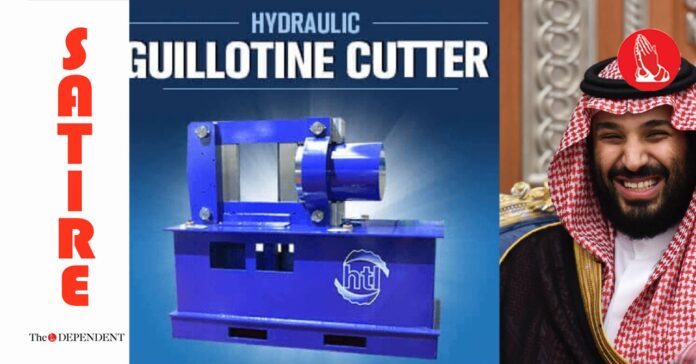 Officials say that in a clear departure from its antediluvian past, the kingdom will now use modern technology to behead criminals.

“Now crimes such as adultery, atheism and sorcery, will not be punished through primitive execution machinery, namely a man and a sword, but through cutting edge decapitation machines,” a Saudi official told The Dependent.

“This Hydraulic Guillotine Decapitator will only add to our paperwork,” said a grumpy official of the Ministry of Science Research and Technology, moments before being added to the first batch of human heads to be cut by the soon-to-be-unveiled Hydraulic Guillotine Cutter.

Sources close to MBS confirm that the Hydraulic Guillotine Decapitator is the latest in a long list of reforms that the Saudi crown prince hopes to implement not just in Saudi Arabia, but across the Muslim world.

“But in line with MBS’s reforms you’ll soon see women using those detectors to detect shirk, and soon women will even control the Hydraulic Guillotine Decapitator to behead people.”

- Advertisement -
Facebook
Twitter
Linkedin
WhatsApp
Email
Previous articlePakistani batters need to stop batting like I did until tail-end of my int’l career: Hafeez
Next articleBilawal happy with script unraveling in front of him