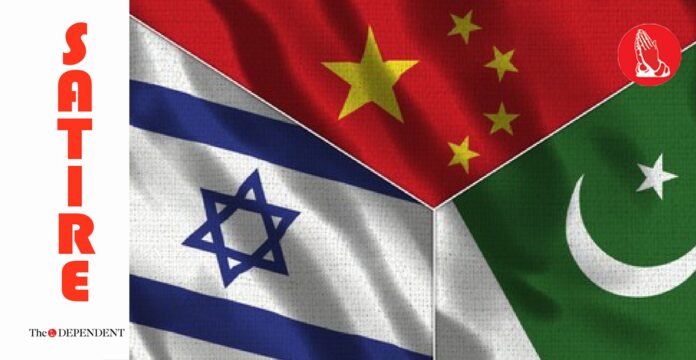 ISLAMABAD/JERUSALEM/BEIJING: Amid the growing number of countries expressing their craving to join the China-Pakistan Economic Corridor (CPEC), yet another state has conveyed its desire to be part of the $62 billion project.

Informed and uniformed sources have informed The Dependent that Israel is all set to join CPEC and help extend the scope of the economic corridor to previously unrecognised parts of the world.

“The whole point of the China Pakistan Economic Corridor is to connect the region, through trade and infrastructure, to those parts of the world that were previously disconnected,” a retired source told The Dependent.

“And what could be more disconnected than a part of the world that we did not recognise and have long claimed does not exist,” the source added.

Further informed and uniformed analysts have reiterated that Israel forms a natural alliance with both Pakistan and China, with a wide range of commonalities linking the three great nations.

“We were already pretty chuffed about CPEC linking Xinjiang and Balochistan,” expressed a leading retired analyst while talking to The Dependent.

“Now we can all safely say that the Uyghurs, the Baloch and the Palestinians will be linked together with even more than mere human rights crises and erasure of identity.”