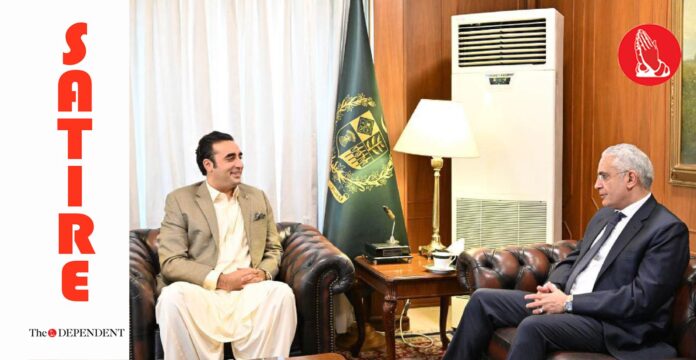 ISLAMABAD: Ambassador of Egypt to Pakistan Tarek Dahroug called on Foreign Minister and Pakistan People’s Party (PPP) Chairperson Bilawal Bhutto Zardari, where the two bonded over a shared admiration of ancient civilisations, The Dependent can confirm.

In addition to exchanging views on a range of bilateral and global issues of mutual interest as part of the portfolios given to them by their governments, the duo expressed respectful eulogies for graves, which they maintained are the bedrock of their sustenance.

“Your excellency, the PPP and Egypt are best known for things that happened many years ago. The Pakistan People’s Party, in fact, is among the oldest civilisations in this region,” Bilawal informed Dahroug.

“Like your pyramids, sphinxes, and temples in Egypt, our revered sites are in Garhi Khuda Bakhsh, which remains the greatest source of the PPP’s identity and economy,” the foreign minister of Pakistan added.

“Right now, you’re looking at the shiniest political artifact of the Bhutto civilisation.”

Further talking about matters of common interests, Bilawal said that if the two representatives can ensure that they continue to properly utilise the benefits of the illustrious people who have passed away, and events surrounding them that took place a long time ago, there can be long-term prosperity.

“Many coming generations in PPP and Egypt can continue to reap benefits of archaeological excavations if we manage to keep the past alive,” the foreign minister said.

- Advertisement -
Facebook
Twitter
Linkedin
WhatsApp
Email
Previous articlePast events should not be allowed to interfere in army’s dignified return to politics: Khawaja Asif
Next articleNot allowing Musharraf to come back in peace will hurt morale of Musharraf, says Nawaz