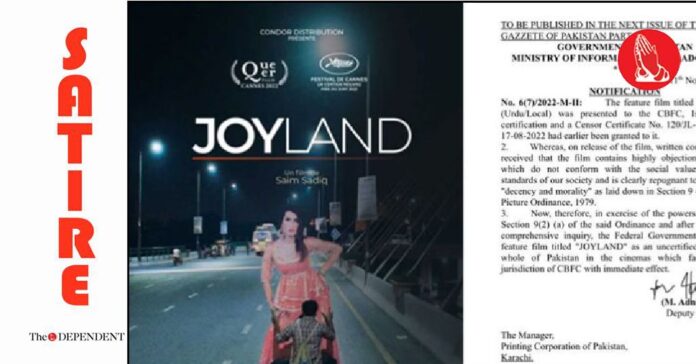 ISLAMABAD: The Central Board of Film Censors (CBFC) has issued a statement following the ban on Joyland reiterating that reality contradicts the culture and values of Pakistan.

“We just cannot accept reality or real movies. They are simply against our culture,” the message released by the CBFC on Monday read.

“The only acceptable Joyland for Pakistan is in Fortress Stadium, Lahore. Asking for more is to destroy the very fabric of our society and challenge its threshold of tolerance,” the message further read.

Speaking to The Dependent, officials of the censor board further clarified that the movie doesn’t fall within the acceptable scale of ethics.

“Some forced sexualisation of women, or violence against women, especially one that is justified by the script, could have tilted the balance and we could have looked into potentially releasing the film with some edits, with due elimination of the storyline,” an official told this scribe.

Another official of the Information Ministry, while talking to The Dependent, insisted that we would all be best advised to follow the nation’s moral compass: Maria B.

“What are we teaching our children? Yes, that question asked by Maria B really opened my eyes. Our children, especially our daughters, need to embrace our true culture which is displayed in Maria B outlets nationwide – we mustn’t abandon our culture of asking for, and paying, undue prices,” the official said, not clarifying if this product placement was sponsored or voluntary.

Answering the question about the movie’s success internationally, especially at the Cannes Film Festival, another censor board official said goray always love things that damage our traditions.

“No wonder they are coming up with all kinds of love, which is leading our people astray. We must take a stand against anyone trying to spread any kind of love,” the official said.

“Love, just like reality, is absolutely against our culture.”