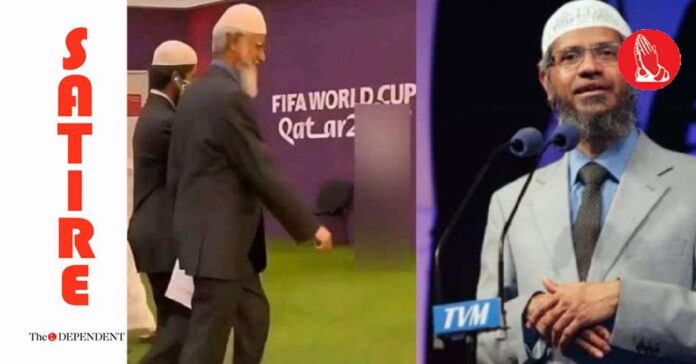 DOHA – Renowned question-answering expert Zakir Naik has said that the Islamic Emirate of Afghanistan should win the FIFA World Cup that got underway in Qatar on Sunday.

Talking exclusively to The Dependent, Naik, who is among the leading figures associated with the events in Qatar, said he expects tough competition down to the wire.

“I see an al-Qaeda-Afghan Taliban final. The Taliban should win it given that they’re the ones who still have an actual country to enter the tournament with,” said the leading analyst on all worldly and unworldly matters.

“Also, the Afghan Taliban have virtual home advantage in Doha. They are the favourites to win anything that takes place here,” Naik added while talking to The Dependent.

Reconfirming that the scribe was indeed asking very good questions, Zakir Naik further maintained that other teams could also be within a shout in the future.

“Honestly, four, if not eight, years ago I would have predicted an ISIS-Boko Haram final,” Naik insisted.

“But we’re in the entertainment business, so I am not sure how popular they would be in terms of the PR value,” he added.

When asked from a Pakistani point of view if the Tehrik-e-Taliban Pakistan (TTP) would be in with a shout, Naik replied positively.

“They are working hard and have made progress in certain areas. The infrastructure is there, along with the state’s support. The Pakistani Taliban should make deep runs at the global level.”