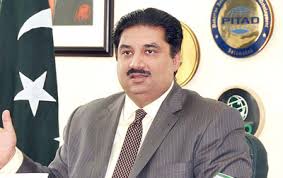 Minister for Commerce, Khurram Dastgir on Thursday stressed the need for establishing Pakistan-Uzbekistan Joint Business Council (JBC) to increase cooperation between the private sectors of the two countries.
Chairing a meeting with high level Uzbek delegation headed by Deputy Prime Minister of Uzbekistan, Ulugbek Rozukulov, he urged the need for exploring investment opportunities in agricultural, pharmaceutical, textile and sports good.

He informed the delegation that there was tremendous trade potential between the two countries and the trade between Pakistan and Uzbekistan was not even reflective of the true potential.
The trade volume between the two countries at present was at the level of US$ 3.92 million in 2015-16 which had increased from US$ 2.98 million in 2014-15.
Pakistan’s exports to Uzbekistan had witnessed marginal increase from US$ 1.347 million in 2014-15 to US$ 2.07 million in 2015-16 while imports from Uzbekistan had also slightly increased from US$ 1.56 million to US$ 1.843 million during the same period.
The major export commodities included energy products, cotton, gold, minerals, fertilisers, ferrous and non-ferrous metals, textiles, foodstuffs, machinery and automobiles while the major imports included machinery and equipment, foodstuffs, chemicals, ferrous and non-ferrous metals.
The minister was of the view that there were certain issues that had hampered the expansion of trade, i.e. lack of direct cargo links, safe and direct land routes, marketing strategies, knowledge of Pakistani products, visa facilitation and costlier transportation by air.
“Barriers and challenges are there but we have to work together to remove the barriers and facilitate the trade,” the minister added.
The minister extended invitation to both public and private sectors of Uzbekistan to organise single country exhibition in Karachi or Lahore which were commercial hubs of Pakistan.
He proposed that Pakistan and Uzbekistan may explore opportunities for Joint Ventures (JVs) in textile industry.
“There is also a need to revive the forum of Joint Commission and the next session may be held at the earliest”, he said.
The minister informed that Memorandum of Understanding (MoU) between Trade Development Authority of Pakistan (TDAP) and the Uzbek Ministry of Economic Affair and Investment had already been signed to promote and develop trade links.
“In this regard, a Central Asia Trade Caravan/Roadshow including single country exhibition is planned to be held in 1st quarter of 2017”, he added.
Deputy Prime Minister, Rozukulov Ulugbek appreciated the efforts and steps taken by the ministry of commerce and the government of Pakistan for promotion of trade between the two countries and assured full support from Uzbekistan government.
Rozukulov Ulugbek informed the minister that Special Economic Zones had been created in Uzbekistan with zero tariffs and Pakistani investors could get avail this opportunity.