Imposition of Neelum-Jhelum surcharge on the cards 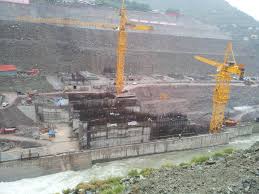 Federal cabinet’s economic coordination committee (ECC) scheduled to meet on Friday and is likely to approve the imposition of Neelum–Jhelum surcharge on all power consumers for one more year and continuation of Rs3 per unit relief to industrial consumers till June 2017.

Well-placed sources disclosed to this scribe that Pakistan Muslim League-Nawaz (PML-N) government has decided to further burden the consumers with the levy to complete already delayed Neelum-Jhelum Hydropower project.

The levy will be collected through monthly electricity bills, and Water and Power Ministry has forwarded a summary seeking imposition of 10 paisa surcharge on all categories of electricity consumers for one year and the continuation of reduced power tariff for the industrial consumers for next six months. They said 10paisa per unit surcharge on all power consumers was earlier imposed for the construction of 969MW Neelum-Jhelum hydropower project.

However, it had become non-functional on December 31, 2018. They also said that currently water and power development authority (WAPDA) was facing a shortage of funds to finance the on-going water and power projects, and WAPDA with the imposition of the surcharge would be able to collect Rs6-8billion from the power consumers to complete the already delayed Neelum–Jhelum hydel power project.

“Due to shortage of funds at WAPDA’s end, the government is set to impose Neelum–Jhelum  surcharge on all power consumers which will remain effective till December 2017,” sources said, adding, “power ministry has forwarded a summary to federal cabinet’s economic coordination committee (ECC) seeking final approval in this regard.”

It is pertinent to mention here that Neelum-Jhelum Hydropower Company – a subsidiary of WAPDA – is managing the 969 MW project located in Muzaffarabad, Azad Jammu and Kashmir. As per agreed on timelines by the contractor, the first generating unit of the project is expected to be completed in July 2017, whereas the remaining three units will come online one by one until the end of December 2017. On its completion, the project will contribute 5.15 billion units of low-cost and environment-friendly electricity to the system each year.

Sources also said that if the ECC did not approve the summary then power distributing companies (DISCOs) would stop collecting of Nelum-Jehlum surcharge. And, it will add financial problems to WAPDA.

They said the cost of the project has gone above Rs450billion while around Rs 150billion increase in the cost was only because of the delay. “Neelum–Jhelum hydropower project is likely to complete by December 2017,” the sources said.