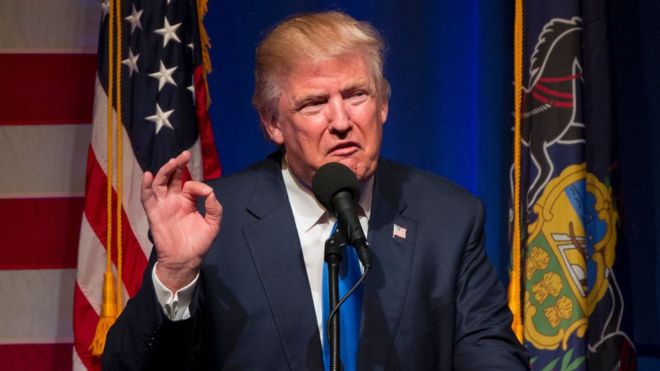 US President-elect Donald Trump has threatened Toyota Motor Corp (7203.T) over its Mexican-built cars, but the biggest risk from a punitive tariff would be for its compatriot Nissan Motor Co (7201.T), the largest automaker operating in the country.

Trump has criticised U.S. companies like General Motors (G.N) and Ford Motor Co (F.N) which manufacture abroad, accusing them of costing US jobs. On Thursday he took on Toyota, warning the world’s largest automaker that it would face a “big border tax” if it exported Mexico-built cars to the US market.

But it is Nissan, Japan’s second-largest automaker, which would be the bigger victim of any tax punishment. Nissan built its first overseas plant in Mexico in 50 years ago and now produces more than 800,000 cars there, mainly its entry-level Versa and Sentra sedans.

Nissan’s production dwarfs that of Toyota, Honda Motor Co (7267.T) and Mazda Motor Corp (7261.T) in Mexico. It exports roughly half of its output to the United States, where it also has production plants.

Vehicles made in Mexico comprise roughly one-quarter of Nissan’s total U.S. vehicle sales, industry experts say, compared with around 30 percent for smaller rival Mazda, but less than 10 percent for Toyota and Honda.

Japanese automakers together produced around 1.4 million vehicles in Mexico in the year ended March, nearly 40 percent of the country’s total output. According to the Japan External Trade Organization, they plan to ramp up production to 1.9 million by 2019.

Current production in Mexico is dwarfed by the number of cars they produce in the United States, their single largest market, where Japan’s top three automakers alone produced around 4 million vehicles in 2015.

Trump has said he plans to renegotiate the North American Free Trade Agreement between the United States, Canada and Mexico, and has vowed to impose a 35 percent tariff on cars exported to the United States from Mexico.

According to JP Morgan estimates, an increase in tariffs on cars exported from Mexico to the United States to even 10 percent would hit Nissan’s consolidated operating earnings by 10.3 percent, more than 5.5 percent at Mazda. Toyota would see a hit of 0.7 percent, while Honda 2.2 percent.

All four Japanese automakers building cars in Mexico said they have no immediate plans to change operations, and one Asian auto executive told Reuters his company long ago made a strategic decision to make Mexico a production hub in North America, and that it is tough to alter its strategy overnight.

“We can’t turn back the clock on these decisions,” said the executive, who did not have clearance to speak to media and so declined to be identified.

“What we need to explain more clearly (to Trump) is that most automakers are not cutting production capacity or jobs in the United States to make Mexico an additional production hub.”

Still, analysts said automakers would likely think twice about expanding production in the country in the coming years.

“As long as this administration is in place I suspect (Nissan is) not going consider any additional capacity there,” CLSA analyst Chris Richter said.

Trump’s criticisms come just as Japanese automakers are shuffling their production portfolios to boost the supply of popular, higher-margin sport utility vehicles (SUV) and trucks for the U.S. market.

Honda last year announced it would expand its U.S. production capacity to build more of its CR-V SUV, while shifting production from Mexico.

Toyota has said that its Guanajuato plant under construction in Mexico will produce the entry level Corolla sedan, a vehicle segment currently produced at its plants in Mississippi and Ontario, Canada. Demand for the cars has slumped in recent years as cheap gasoline prices has prompted drivers to buy more SUVs.