Ease of doing business is a global competition and is a continuous process: World Bank 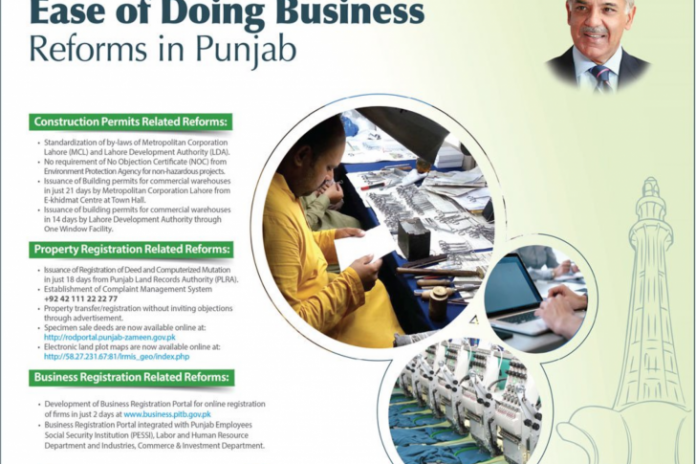 LAHORE: Provincial Finance Minister Dr Aisha Ghaus Pasha said that Pakistan aims to be among the top 50 countries on the Ease of Doing Business (EoDB) list by 2020. Meanwhile, complimenting Dr Pasha’s comments, World Bank Country Director Illango Patchamuthu said that this is a continuous journey that Pakistan has embarked on and has a long way to go.

She was speaking at the Doing Business Reforms Exhibition 2018, organised by Programme Implementation Unit (PIU), Planning and Development Department (P&D), Government of Punjab in collaboration with the World Bank (WB) on Monday.

According to Dr Aisha Ghaus Pasha, the agenda of Ease of Doing Business is to simplify procedures, cut down costs and reduce the time for operationalisation and conducting business in Punjab.

Dr Pasha stated, “The private sector plays a huge part in contributing positively towards the economy, for this matter the government is committed to increasing transparency and efficiency in the administrative procedures as this will create an enabling environment for private sector development and uplift investor’s confidence”.

While talking to Pakistan Today World Bank Country Director Illango Patchmuthu said, “Exhibitions like these show how far Pakistan has come in such a short time. A few years back there was no considerable change that could be exhibited but now Pakistan is making exponential progress.”

While talking about political influences on the EoDB index and its ratings, Illango said, “Yes, at times, political influences might be there, however, we have experienced nothing like that in Pakistan.” He added, “Up till now Pakistan has been able to keep up with the reforms and has performed well.”

However, he said that despite considerable reforms, Pakistan’s rating has fallen down this year simply because this is a continuous process, adding that it is a global competition among world economies and Pakistan cannot rest after initial reforms but has to strive to perform better each year.

While talking to Pakistan Today about Pakistan’s vision to be in the top 50 countries on the index, World Bank Programme Leader for the Asian Region Shabih Aki Mohib said, “Pakistan can surely compete for the top 50 slots, however; this is a continuous process and has to be maintained. The higher you rank on the index the tougher the competition is likely to be and it becomes harder to maintain that position.”

To a question about corruption, he said “We have witnessed that over-regulated economies have a tendency to be more corrupt. The idea is not to regulate the economy but to re-regulate it so that the overall ease of doing business boosts and eventually subdues corruption.”

Moreover, P&D Department Secretary Iftikhar Ali Sahoo said: “Out of the 15 reforms we have successfully implemented 14 and are on track to achieving the 15th reform as well.”

Planning and Development Board Chairman Jehanzeb Khan said that to improve the business environment and create employment, the P&D Department had launched its Punjab Jobs and Competitiveness (J&C) Programme in collaboration with the World Bank Group. He added that it was imperative for Punjab and Sindh government to synergize their efforts in order to improve Pakistan’s ranking as this cannot be done single-handedly due to the significant difference in weightage of each province.

However, despite the positives, members of the audience while talking to Pakistan Today raised serious concerns over the reforms. An attendee told Pakistan Today, “Most of the reforms are geared towards digitisation, however, the current IT infrastructure is too weak to support such reforms.” He added, “the drive towards blockchain technology is a good step, however, the currently it poses serious security and sustainability threats.”

He went on to say that there is too much ambiguity regarding the criteria used by World Bank for ratings. “In 2017, WB praised Punjab government’s efforts over land registration reforms however it did not acknowledge that in the recent ratings.”

The exhibition was held to showcase the reform efforts made by the Government of Punjab to improve the Doing Business Environment of the Province and served as a means to communicate to the public and private sector about the reforms implemented under the Ease of Doing Business project. Environmental Protection Agency (EPA), Punjab Land Records Authority (PLRA), Lahore Development Authority (LDA), Lahore High Court (LHC) and Metropolitan Corporation Lahore (MCL) along with other public institutions showcased different reforms at the exhibition.

Eleazar Bhatti
The writer currently serves as the Content Manager at Profit by Pakistan Today and is an economics graduate from Leeds Business School in the UK. He can be reached at eleazar.bhatti@pakistantoday.com.pk or at twitter.com/eleazarbhatti.