Rupee likely to fall below 125 to dollar after Eid 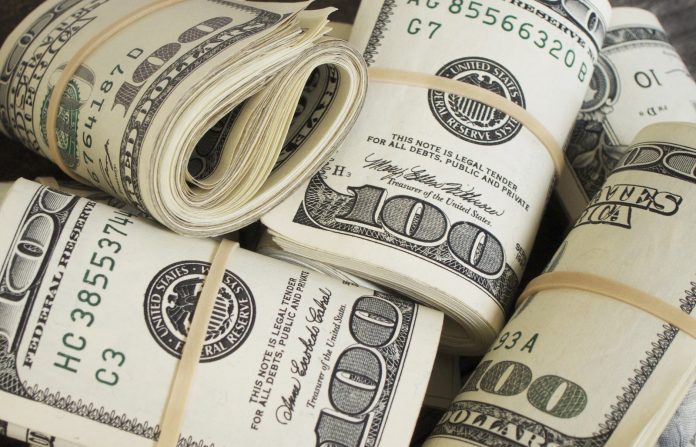 LAHORE: The rupee’s approximately 4 per cent drop against the dollar last week, from 115.63 on Monday to 121.39 by the close on Thursday, once again rattled the currency market amid renewed fears of inflation and a Balance of Payments (BoP) crisis. Yet it was a natural, and not entirely unexpected, move towards the currency’s fair value.

The Pakistan Muslim League-Nawaz’s managed float regime kept the rupee overpriced throughout its tenure. And, it seems, once its iron grip on the money market ended, the central bank simply stopped intervening aggressively when demand for dollars soared.

This is the third devaluation in six months, squeezing almost 14 per cent from the rupee (against the dollar) since December 2017. And the trend is expected to continue after the long holiday weekend.

“I would not be surprised if it moves beyond 125 on June 19,” said Ehtisham Khan, head of capital markets at Pak-Brunei Investment Company. He is also one of Pakistan’s few Chartered Market Technicians (CMT).

The rupee’s long-term trajectory against the dollar, Ehtisham explained, reflected an average annual 5 per cent depreciation.

“But when the exchange rate is artificially kept at a certain level it tends to move abruptly, sometimes, towards the real effective exchange rate, roughly the long-term mean,” he added.

So it happened after the Musharraf era. After staying flat at around Rs61-62 in 2005-06, it kept dropping till it eventually settled around Rs84, with the press putting the blame squarely on the Pakistan People’s Party (PPP) government.

And so it is happening after the PMN-N administration of 2013-18. The sudden three-percent-odd drops in the rupee over the last six months – when Ishaq Dar’s influence on the Finance Ministry ended – are part of this process of correction.

Yet this time the rupee faces pressure not just because of its own weakness, but also the dollar’s strength in the international market. Riding on rising interest rates and a safe-haven trading inflow, the dollar index has surged more than 4.5 per cent since April.

Dar’s obsession with keeping the rupee at around a hundred to the dollar (though it swung between 98 and 105 during his time) relied on continuously buying more rupees whenever there was downward pressure on the currency.

That is why the rupee stayed more or less flat even though most Asian currencies were devalued from 2013 onwards. But the interventions, along with a record current account deficit, have reduced Pakistan’s foreign exchange reserves to only two months of import cover.

Therefore, it’s not just a matter of correction. Rather, the SBP could no longer intervene even if it wanted to.

“They simply do not have the reserves to prop up the rupee anymore,” said Salman Shah, former finance minister.

And considering how deep the deficit is in red, the government will need to either borrow heavily or attract significant foreign investment to shore it up. “But with exports declining, the power crisis rendering industry uncompetitive, and imports mounting because of CPEC, any relief is a long way away.”

Also, with large debt payments due next fiscal, the deficit is due to come under yet more pressure.

Since the previous two episodes of devaluation could not trigger any improvement in exports and instead made imports and debt payment (in dollars) that much more expensive, analysts are beginning to warn about an inflation time bomb down the road.

“With the rupee coming under increasing pressure, it is only natural for inflation to mount,” said Hammad Malik, market consultant, analyst and academic.

There is clearly a demand for dollars, explained Hammad, and unless adequate supply is made available, the rupee will begin to move again.

And with the deficit deep in red, “the government will most likely take to printing money,” added Hammad. “There are already rumours of larger currency notes being introduced shortly. You may well see a 10,000 rupee bill in circulation next fiscal.”

The state bank’s recent tightening of monetary policy – increasing the interest rate twice in one year to 6.5pc – is indicative of pricing in inflation sooner rather than later.

“It also shows that we are laying the groundwork for another bailout,” Hammad said, since IMF, or any international donor, would clearly require a more realistic exchange rate and belt-tightening in the commercial market.

Currently, of the $10 billion that makes up Pakistan’s forex reserves, Rs5.4 billion is from an IMF loan while Rs2.5 billion comprises cross-currency swaps.

And unless we can finance around $10 billion, the rupee will remain under more pressure than it might be able to bear.