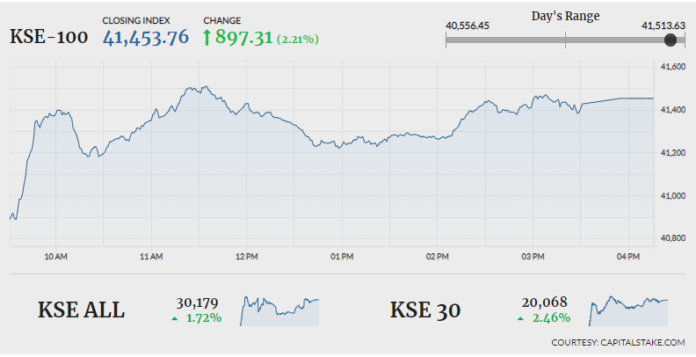 KARACHI: Trading resumed at the Pakistan Stock Exchange (PSX) on an optimistic note where bulls remained in charge of the market all day long. Indices rallied while volumes were at their record high for the year 2018.

Experts believe the relief package from Saudi Arabia last week brought much-needed clarity to the market, adding that further financial support from friendly countries including Malaysia, UAE and China which will help stabilize the economy.

The market volume on Monday surged up by a massive 48 per cent from the last trading session and was recorded at 461.07 million, which is the highest since May 24, 2017, right before Pakistan was officially inducted in the MSCI EM space. Total value traded during the session exceeded $117 million, the highest since Jan 24, 2018.

D G Khan Cement Company Limited (DGKC) appreciated by 5 per cent, while Lucky Cement Limited (LIUCK +5.00 per cent) touched its upper-lock after the company declared its financial results for the first quarter of Financial Year 2018-19 (1QFY19). The company’s sales increased by a slight 2% QoQ, whereas the earnings per share declined from Rs9.33 in the same period last year to Rs7.71 in the current year.

GlaxoSmithKline (Pakistan) Limited (GLAXO +1.81 per cent) released its financial performance for the third quarter of 2018. Sales appreciated by 5%per cent QoQ, while the earning per share depreciated from Rs2.46 in the same period last year to Rs1.70 in the current year. The company’s gross profits were deteriorated by 16 per cent QoQ due to the increase in cost of sales (13 per cent QoQ).