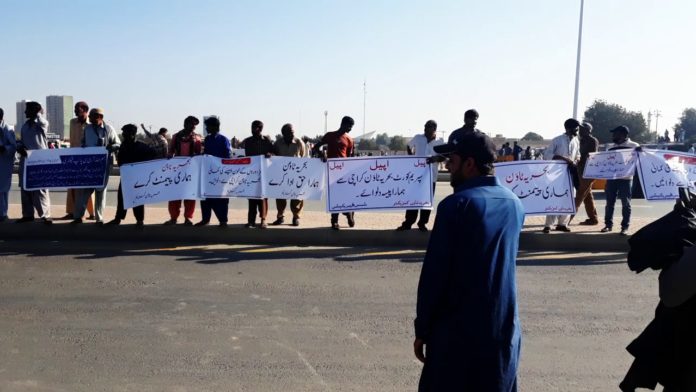 KARACHI: The employees and contractors of Bahria Town, who had blocked the Super Highway while protesting against non-payment of salaries on Saturday, ended their demonstration after six hours of negotiations with the police and provincial authorities.

Bahria Town residents, contractors, builders and employees were all part of the protests who appealed to the chief justice and prime minister to resolve their issue.

The private housing society’s employees and contractors had also taken out a rally in Tauheed Commercial area of Defence. Families of overseas Pakistanis and investors were part of the rally.

Bahria Town, a privately owned real estate development company which operates across the country, is facing a severe financial crisis after the Supreme Court’s verdict regarding sale and purchase of property in Bahria Town Karachi.

In May this year, the apex court had barred Bahria Town from selling or allotting land in the Bahria Town Karachi project, as it struck down the shady allotment of land to the company by the Sindh government through the Malir Development Authority (MDA). In a 2-1 verdict, the bench hearing the case also directed anti-graft watchdog NAB to file references against those responsible for legal violations.

Since then, the protesters claimed that 5,000 workers were not paid salaries and overtime compensation. Estate agents and investors of the housing scheme have staged multiple protests against the development.

Some investors, who have paid instalments over the previous five years, questioned the fate of their life savings and urged the government to protect their investment.

It is feared that over 45,000 employees of the Bahria Town may face delays in their salaries. Contractors are also not getting paid and various contracts worth millions of rupees have been cancelled.

According to rough estimates, the investment in Bahria Town projects is almost $20 billion. All restoration and development work came to a halt due to the crisis. Since the top court’s verdict, there has been no progress in all development projects of the housing scheme