PSX closes in green amid volatility 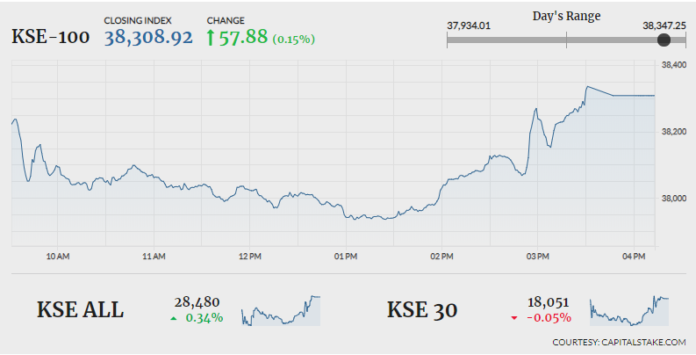 KARACHI: The investors of the Pakistan Stock Exchange (PSX) witnessed a jittery ride on Monday as they waited for the verdict by the accountability court on a reference against former prime minister Nawaz Sharif.

Indices oscillated in north and south in search of a direction, as investors remained indecisive and preferred to stay on sidelines, thus lowering the volumes. Foreign investors ended as net-sellers in the last five sessions of the outgoing week with a total outflow of $12.22 million. The banking and oil & gas exploration sectors took the worst hit.

Moreover, as per news reports, Foreign Minister Shah Mehmood Qureshi, while speaking to media in Multan, revealed that the foreign ministry will be hosting a two-day conference aimed at attracting foreign direct investment into the country and dignitaries from atleast 11 different counties will be attending the conference.

Sind Abadgar’s Sugar Mill Limited (SASML +1.57pc) released its financial performance for the year ending 30th September 2018. A final cash dividend of Rs1.60 per share was declared by the company. Sales surged up by a massive 109pc YoY, while earnings per share improved from Rs-38.43 in the same period last year to Rs6.54 in the current year.