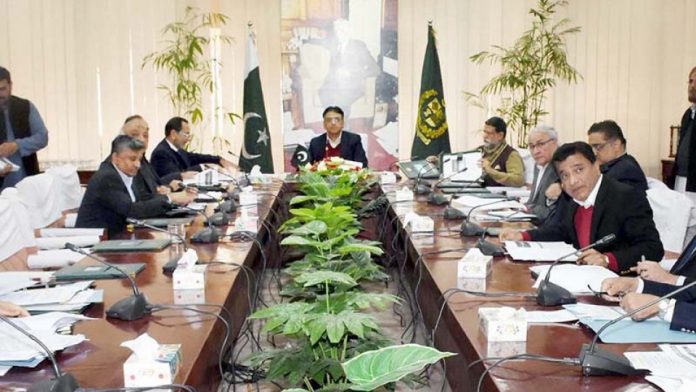 ISLAMABAD: The Pakistan Tehreek-e-Insaf (PTI) government has constituted the Policy Board of Federal Board of Revenue (FBR) and held its first meeting on Wednesday.

Although the government had claimed to introduce major reforms in FBR, it constituted the policy board five months after coming into power.

According to sources, there are no immediate reforms likely to be introduced by the incumbent government this year, as the newly constituted policy wing of FBR would be meeting on a quarterly basis.

“The policymaking process needs regular meetings with stakeholders,” said a former FBR official, adding that the government could have formed the wing in its first month.

As per finance ministry officials, the FBR Policy Board was created under the FBR Act 2007, and its first meeting was held on Wednesday with Finance Minister Asad Umar in the chair.

As per details, the finance minister shall be the chairman of the policy board while the ministers for commerce, textile, industries and privatisation shall be the ex-officio members of the board along with the chairmen of the standing committees on finance and revenue – Senate and National Assembly. The FBR chairman shall be the secretary of the board.

During the meeting, the FBR chairman gave a detailed briefing on the working of the FBR and specially mentioned the actions recently taken by the board with regard to improving its performance.

According to the ministry, all the ex-officio and nominated members congratulated the finance minister on the formation of the policy board after such a long time and welcomed the stance of the PTI government to consult with non-governmental members for improvement in the tax system of the country.

After the detailed briefing by the FBR chairman, it was decided that the Senate Standing Committee on Law and Justice shall be asked to review the FBR laws.

The NADRA chairman was directed by the chair to start working on proposals for broadening of the tax base through the use of data already available at NADRA.

Abdullah Yousaf on the occasion stressed on the need for “systemization through automation” so that the elements of harassment and use of discretionary powers may be minimized.

He was also directed by the chair to make a detailed presentation on the audit and inspection system of FBR and suggest improvements in the system. The presentation will be first shared with Hammad Azhar and later be brought to the policy board for further action.

Minister of State for Revenue Hammad Azhar said that it is his earnest desire that the FBR Policy Board may design ToRs for bridging the gap between policy and administration.