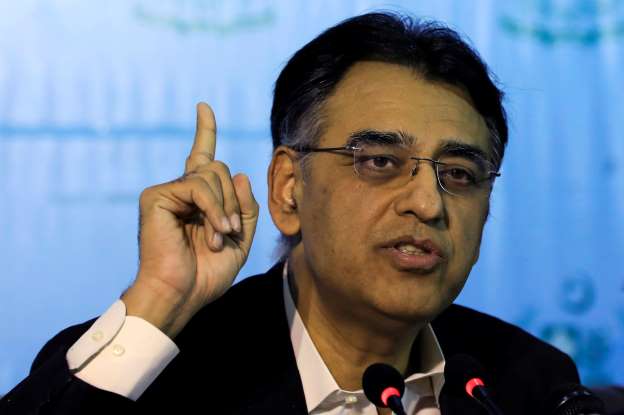 ISLAMABAD: Finance Minister Asad Umar said on Monday that Pakistan is all set to avail a bailout package from the International Monetary Fund (IMF) ranging between $6-8 billion.

Addressing a press conference after his return from New York, the finance minister said that Pakistan and IMF have signed a policy-level agreement and both sides have also exchanged copies of the agreement. He said that the agreement is about improvements in public sector enterprises, transmission and distribution system of electricity in public finance budget.

Talking about the meetings with IMF officials, the finance minister said that they did not ask anything about the China-Pakistan Economic Corridor (CPEC) as Pakistan had already shared the details of the project in October 2018. “When it comes to CPEC, we have nothing to hide about,” he said.

Responding to a question, the finance minister said that the IMF programme would not burden the inflation-hit masses. He, however, admitted that some unpopular decisions needed to be taken to stabilise the economy and those decisions might add a little burden to the people.

He also said that the IMF programme will facilitate the agreed financial support to Pakistan from the World Bank, Asian Development Bank and International Finance Corporation. He added that following the bailout package, World Bank will also extend $7.5 billion to Pakistan, making the total financial uplift to around $15 billion. “International Finance Corporation and Asian Development Bank too will help in the same pattern,” he said.

Talking about the Financial Action Task Force (FATF), the finance minister said that he met with FATF President Marshall Billingslea during his US visit, who assured him that the decision regarding Pakistan’s position would be taken on technical grounds.

Asad Umar said that Pakistan would send its compliance report to FATF by Monday evening. He also said that a delegation of FATF would visit Pakistan in the third week of May to review the implementation efforts of Pakistan.

“I have also conveyed my reservations over India’s attitude and bias. The FATF president assured us that any decision about Pakistan’s position would be strictly taken on merit,” he added.

Earlier, while briefing the National Assembly’s Standing Committee on Finance, Revenue and Economic Affairs, which was chaired by Faizullah Kamoka, the finance minister said that the IMF package would ease off pressure from the country’s foreign reserves. “External account pressure had reduced our foreign reserves to $6.6 billion by mid-January but with short-term financing from Saudi Arabia, United Arab Emirates and China, our foreign reserves increased to $10.5 billion by March end,” he said.

He also said that the capital market would also improve following the IMF programme. He added that the public will not be impacted by IMF agreement and the government has no plans of raising electricity prices.

When members of the committee insisted that the minister share details about the IMF package, the finance minister said that he would share the details of the package once the staff-level agreement is signed between Pakistan and IMF.

The finance minister is set to meet Prime Minister Imran Khan and take him into confidence regarding the IMF talks.

Earlier on Monday, an IMF statement said that it held “constructive discussions” with Pakistani authorities during last week’s spring meetings in Washington and that its mission will be visiting Pakistan “before the end of April to continue the discussions” on a bailout package.

The announcement was made by the Office of the Resident Representative of the IMF following reports that the IMF mission’s visit of Pakistan for finalising the package may be delayed as both sides are still engaged in an intense discussion.

“The Pakistani authorities and IMF staff held constructive discussions during the IMF/World Bank Spring Meetings in Washington DC towards an IMF-supported programme,” the IMF statement said.

“At the request of the authorities, an IMF mission will be going to Pakistan before the end of April to continue the discussions,” the statement added.

The IMF agreed to a three-year bailout package for Pakistan, after a high-level delegation led by Asad Umar met with IMF and World Bank officials on the sidelines of the annual spring meeting in Washington DC.

Reportedly, the world lender did not object to an asset declaration scheme proposed by Pakistan as Pakistan had already shared a draft of the proposed scheme with the IMF and the FATF.