All that was not said at the Economy Survey launch 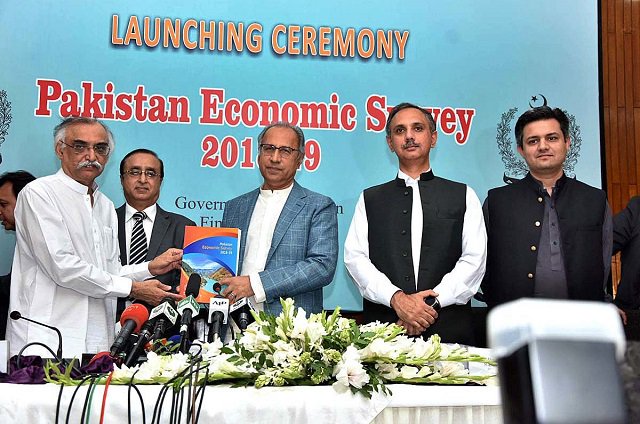 ISLAMABAD: While counting on the failures of previous governments and shedding light on the poor economic decisions made over the decade before PTI came to power, what Finance Advisor Dr Hafeez Sheikh very conspicuously missed in his Pakistan Economic Survey 2018-19 launch speech was any comments on the incumbent’s government performance over the past ten months.

The numbers are there to show that the present government has missed on all but a handful of targets it set for itself at the beginning of its tenure, yet the resilience shown by the officials on the stage to justify all-things-bad as an inheritance instead of a result of the current government’s own shortcomings was commendable. Despite that, Dr Hafeez did not mention any major successes bagged by the Pakistan Tehreek-e-Insaf (PTI) government.

Some damage control was attempted by Advisor for Commerce, Textile, Industry and Production, and Investment of Pakistan Abdul Razak Dawood when he said that the current regime has “stopped de-industrialization in the country.” However, any recovery in the industrial sector is yet to be seen as the stats provided by the economic survey only show downfall up till now.

Apart from this, today’s presentation was pretty much an apologist’s explanation on how the previous governments kept borrowing without concern for the national economy and how the “poor government of a poor country” cannot absorb the increase in international prices to provide relief to the locals.

Exports have grown zero per cent over the past ten years, the foreign debt, however, grew by $100 billion, as per the survey. But what was not mentioned in today’s speech was that PTI government is still more inclined to invest in National Single Window instead of export reforms. Dr Hafeez went to great lengths to recall the sunk investments in state-owned organizations – airlines, insurance, railways etc. – and how they have only been a source of leakage on the budget instead of helping towards any public benefit like health and education. Here too, he conveniently forgot to mention the Rs20 billion sovereign guarantee approved to be given to the National Investment Trust for stock market bailout.

The debt taken by the previous governments cannot be discounted just as the mammoth figure of Rs3.65 trillion added to the public debt by the current government over the past nine months should not be ignored. The finance advisor had an explanation for the latter. “We had to borrow the money to pay back the instalments of what was borrowed by the previous regime.”

Some other highlights of the economic survey showed agricultural sector’s growth at 0.85pc against the target of 3.8pc. Large Scale Manufacturing also declined to 2.93pc as compared to last year’s 6.33pc. On the fiscal development side, revenue collection stood at 15.1pc of the GDP while expenditures amounted to 21.6pc of the GDP. Development expenditure and PSDP expenditure also decreased on a year-on-year basis.

The response to the speeches from the attendees was perhaps as interesting, and gloomy, as the economic survey itself. When the finance advisor said that inflation hurts the government the most because the incumbent government is a result of public votes, sneers and smirks filled the room.

Similarly, when the advisor was asked what is to be expected of Shabbar Zaidi as Chairman of Federal Board of Revenue and he responded by saying that he himself is sitting amidst the public waiting to see that, the secretariat hall filled with laughter.