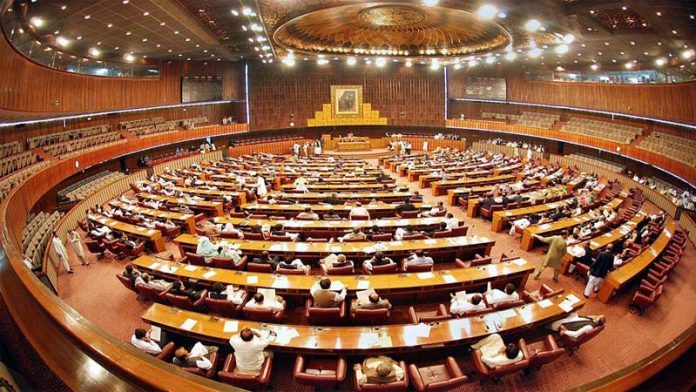 ISLAMABAD: The National Assembly on Wednesday approved 26 demands for grants worth Rs313 billion related to various ministries and departments for the next financial year 2019-20 by rejecting all cut motions presented by lawmakers from opposition benches.

Earlier in the day, the opposition lawmakers 720 cut motions after debate on the federal budget resumed. These included cuts in allocations to the Aviation Division, the Establishment Division, the National Security Division, and the Poverty Alleviation and Safety Division.

Prime Minister Imran Khan, was also in attendance today, whereas the opposition parties were low in number due to the All Party Conference (APC) is Islamabad, hosted by Jamiat-Ulema-e-Islam (JUI-F) chief Fazlur Rahman.

Earlier, Minister for Revenue Hammad Azhar moved various demands for grants that were approved through a voice vote.

Speaking prior to the voice vote, Pakistan Muslim League-Nawaz (PML-N) leader Ayesha Ghaus Pasha said that there had been an 83 per cent increase in the demands for grants.

She said the government was pushing people below the line of poverty and yet it takes credit for ‘initiating social welfare programmes’.

Pakistan People’s Party (PPP) leader Nafisa Shah demanded a parliamentary body to review the debt management policy of the current government instead of a commission to investigate the utilisation of debts obtained by previous governments.

PPP’s Hina Rabbani Khar also called out the government for its austerity drive. She said the prime minister used to claim in his speeches that he had reduced the expenditure of PM Office, but the current budget allocates Rs1.17bn to the PM Office as compared to last year’s Rs986m.

PML-N’s Khawaja Asif expressed his fear that the “free fall of the Pakistani rupee will drown us”. He said the US dollar and British pound currently trading at Rs161 and Rs201, it appeared that rupee devaluation had gone out of control.

PPP’s Abdul Qadir Patel criticised the government over its large cabinet size. “There is an army of ministers, advisers, and spokespersons. They are enjoying protocol and wasting public money,” he said.

PML-N’s Khurram Dastagir also criticised the government for a big cabinet size. “They used to say that their cabinet would comprise 12 members. Now it is four times larger,” he said.