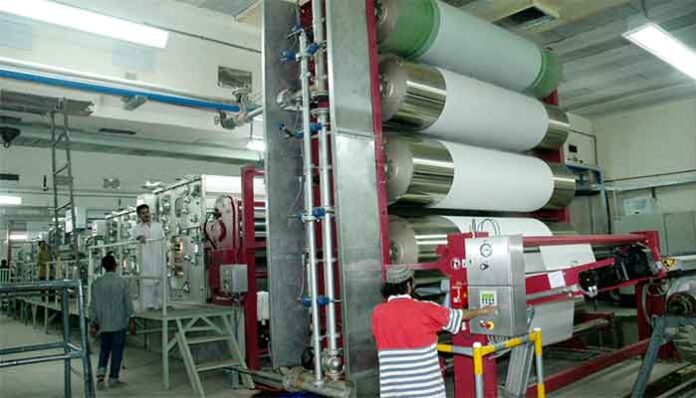 FAISALABAD: Pakistan Textile Exporters Association (PTEA) has demanded immediate redressal to the issues that are impeding the growth of exports, saying that problems like stuck-up liquidity in refund regime, non-availability of subsidy on energy supplies and the imposition of duties & taxes on inputs/raw materials have adversely impacted the textile exports and industry.

In a statement issued on Wednesday, PTEA Chairman Khurram Mukhtar said that new tax regime has halted the textile export cycle, as extreme cash flow crunch has squeezed the financial streams, non-availability of subsidy on energy supplies has increased the production cost, levy of anti-dumping duty on basic raw materials and withdrawal of exemptions of sales tax and FED on locally procured input goods have disrupted the supply chain and slowed down the export pace.

Elaborating the situation, Khurram Mukhtar said that a major part of the textile exporters’ working capital, amounting to Rs155 billion, has been stuck in the refund regime, creating extreme financial stress. Cost of capital is more than the average profitability of the textile sector, he lamented.

“Before the withdrawal of SRO 1125, average input tax paid was 1.75pc of the national exports; however, subsequent to the withdrawal of zero-rating, the figure shall elevate to 12.8pc of the total exports. Resultantly, exporters’ working capital of around Rs424 billion will be stuck in the refund regime in 180 days.”

He noted that in order to cut down the production cost of exports goods and to secure the competitive edge over regional rivals, special tariffs on energy supplies (Gas /RLNG at $6.5/mmbtu and electricity at 7.5 cents per Kwh) were allowed to zero-rated sectors in October 2018. After March 2019, he added, no subsidy is available on gas supply and funds of Rs4.5 billion allocated in this respect has been lapsed due to “end of the financial year”.

New notifications have not yet been issued and exporters are being charged on normal tariffs, he highlighted, demanding an immediate transfer of subsidy and issuance of a notification in this regard.

Highlighting another major issue of imposition of duties & taxes on inputs/raw materials, he said that exemption of sales tax and FED on the purchase of locally-procured input goods by exporters operating under EOU Rules has also been withdrawn. Terming this move “anti-export”, he said in the current scenario, wherein 17pc sales tax has been imposed on all goods across the board, such concessions were the only ray of light in the cut-throat competition faced by the Pakistani exporters.

Furthermore, he informed that the import of basic raw materials (Yarn and Hydrogen Peroxide) has also been subjected to anti-dumping Duty, which is entirely against the myth of manufacturing bond scheme and will increase the production cost of export items.

“Certain elements have misled the government that import of yarn is hurting the local industry; facts are entirely different as only 44,195 tonnes of yarn was imported in FY2018, as compared to the export of 479,366 tonnes,” he added.

Khurram Mukhtar termed the above “an attempt to manipulate the market demand & supply and to increase the yarn prices in the local market”.

Pointing out the investment issues, he said that share of subsidized loan has been decreased from 41pc to 27pc in a year and the sector has been relying heavily on commercial loans. He urged the government to increase the ceilings of Long Term Financing Facility (LTFF) and Export Refinance Sscheme (ERF) to encourage exporters.