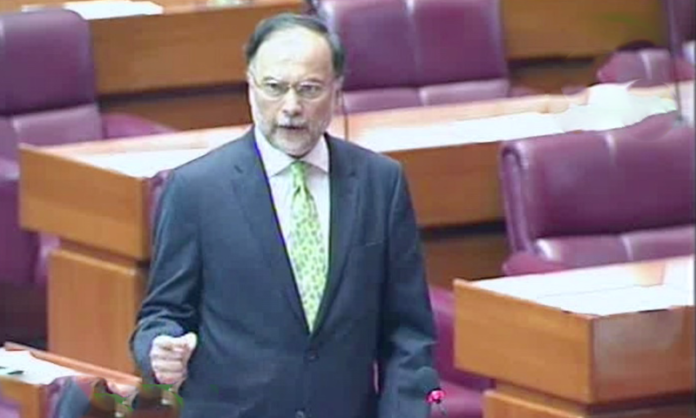 ISLAMABAD: Pakistan Muslim League-Nawaz (PML-N) leader Ahsan Iqbal on Thursday vehemently criticised the Pakistan Tehreek-e-Insaf (PTI) government, saying it believes that the “200 million population of Pakistan lives in a village and can be fed through a couple of langars and tandoors”.

The former minister was responding to Adviser to the PM on Finance Abdul Hafeez Sheikh’s speech in National Assembly a day earlier wherein he talked about the ailing state of the economy and responded to opposition’s criticism on it.

In his speech, Shaikh had said that those who had themselves approached the International Monetary Fund (IMF) should not be criticising the government for doing the same, in an apparent reference to the PML-N.

Iqbal, when given the NA floor on Thursday, said: “These people kept criticising us at every step of the way, now they are asking us not to criticise them for taking the same measures. If these measures were so bad, why are they carrying them out today?

“What they failed to understand is that once these projects were completed, the deficit would also have come down and rationalised,” Iqbal said.

Minister for National Food Security Makhdoom Khusro Bakhtiar, who took the floor after Iqbal, lamented that the government was facing troubles due to low revenue. He said that currently, there were five million bank accounts in the country but only 0.5m were within the tax net.

“We need to take a moment and think across party lines on how we will run this country when the volume of debt is at 78 percent. We will have to pay interest and a principal amount on it.

He insisted that every government will face the same challenges as the incumbent one. The federal minister said the share of investment by the private sector in Pakistan’s economy was a mere 9pc because banks do not have the money to provide loans.

“We need to develop a mindset in this country that investors need to be respected,” he said.

“The tragedy of this country is that we keep changing policies,” he lamented. “First we [implemented a] nationalisation policy, then [later] we privatised all the banks.

“What are the banks doing? Right now, banks are providing money to the government, or to the main sectors like fertiliser, sugar, cement, on the most favorable interest rates. But the small sector, that of small-medium enterprises (SME), are merely getting 6pc of credit — in 2000, they would get 17-18pc of total credit.

“So we will have to think that when we develop a national development finance institution, the money will flow into SMEs and new sectors.”

He also directed the House’s attention towards the developing economies of neighbouring countries China and India, adding that by the time Pakistan turns 100, the country will have to feed 400 million people from existing resources.

He urged the parliament to unite and draw up a national economic charter instead of doing politics over the economy.

The session was adjourned until 2pm on Friday after opposition pointed out quorum.