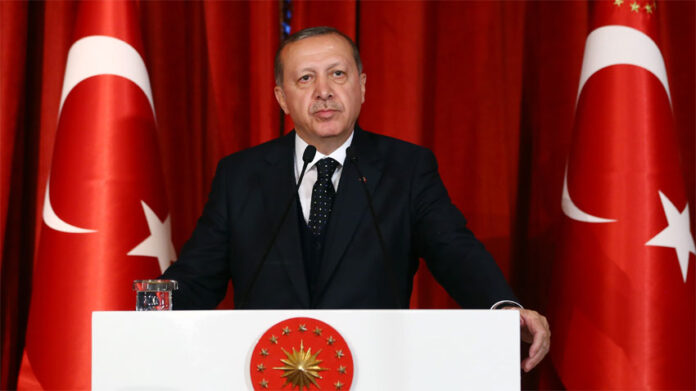 ISLAMABAD: Turkish President Recep Tayyip Erdogan on Friday said that his country is ready to work on China-Pakistan Economic Corridor (CPEC) projects, adding that the initiative should be “better explained to Turkish entrepreneurs”.

Speaking at the Pakistan-Turkey Business and Investment Forum alongside Prime Minister Imran Khan, Erdogan, seemingly referring to CPEC, said: “Turkey is not given the same opportunities that are offered to some other countries.”

The Turkish president began his speech by thanking Pakistan for being “wonderful hosts” on his two-day trip. Recounting his official engagements, Erdogan said that on Thursday he had met President Arif Alvi and, today, also had the opportunity to address a joint session of Parliament.

“Hopefully we’ll open the door for new businesses. We wish to raise the level of Pakistan and Turkey’s business relations to the level of our political relations,” he said.

“Currently, our trade is only $800 million which is not acceptable for us. Our mutual population is over 300 million. Therefore, we have to bring our trade to the level we deserve,” he maintained, adding that we cannot allow protectionism to hinder bilateral trade.

“So we should quickly increase our bilateral trade to $1 billion, and then bring it up to $5 billion. We cannot obtain these objectives only through goodwill, we have to take determined, clear, and strong steps towards our common objectives.”

In Turkey we have 158 companies with Pakistani capital […] we would like to see more such companies, he said. Currently, we have a model in place for offering Turkish citizenship to investors under certain conditions, he added.

“I invite my Pakistani brethren to have confidence in the Turkish economy, we are among the world’s top 20 economies.

“Turkey had a public debt of 72 per cent which we brought down to 30pc. Despite all the attacks, the economic espionage and the regional situation we continued to grow,” he said, stressing on the country’s banking sector and tourism industry.

“We see that Pakistan is taking important steps in facilitating businesses and providing a conducive environment [for them] under the leadership of my brother Imran. We are aware that Pakistan offers a lot of opportunities.

“We have companies of international renown in the fields of defence, transportation, housing, healthcare, and construction,” he stated.

Talking about Turkish serials and dramas which are popular in the country, he said: “Turkish serials that are followed by millions of people abroad are being followed by Pakistanis too, so we should also venture into filmmaking.”

“I have heard that Pakistanis trust western healthcare more, we have to change that.” Turkey is far more advanced than other western countries, with the latest medical advancements and healthcare, he said.

“With our support, and with the efforts of the business community, our economic-social relations will receive the respect it deserves.”

Commenting on Turkish president’s address at the joint session of Parliament earlier in the day, the prime minister said that he [Erdogan] can win the next election in Pakistan.

“I saw the treasury benches thumping their desks as well as the opposition benches,” he said, stressing that the current government will do everything to boost business between the two countries.

In order to achieve this, we need the support of the business community in Pakistan, he added.

“Pakistan can learn a lot from Turkey’s tourism industry. Pakistan has untapped potential in terms of tourism but we lack the necessary infrastructure,” he said, adding that Pakistan has been recognised as an ideal tourist destination by several publications.

Inviting Turkey to invest in the country, the premier stated that, under his leadership, Pakistan jumped 28 spots on the World Bank’s Ease of Doing Business index. He also assured to fully facilitate the Turkish business community in their joint ventures with Pakistani companies.

Kicking off the meeting, Adviser to Prime Minister for Commerce, Textile, Industries, Production and Investment Abdul Razzak Dawood welcomed the Turkish visitors to the country.

“The two leaders of the countries have agreed an inclusive agreement including trade, tourism. We have people from construction, engineers, and people from all professions, God willing we will take [this business relationship] forward,” he said.

“The two countries had meetings in Davos and we have now reached an understanding. As a final followup, we have signed an understanding on the way forward. Both sides will do a study on what is each other’s relative strength. This study will be completed by March and then we will take it forward in April.”

He added that a textile delegation will go to Turkey and to look at how to further the business. We have a great opportunity to work together, we do compete but like good brothers there is no harm in […] taking things forward, he added.

“We are now capable of becoming an Association of Southeast Asian Nations (Asean) country and we will be the closest Asean country to Turkey,” he said, adding that this visit will eventually lead to more trade between the two countries.

Earlier in the day, Erdogan addressed a joint session of Parliament in Islamabad — for a record fourth time — during which he reiterated his country’s support for Pakistan and its stance on the Kashmir issue.