Food inflation on the rise despite reduction in POL prices 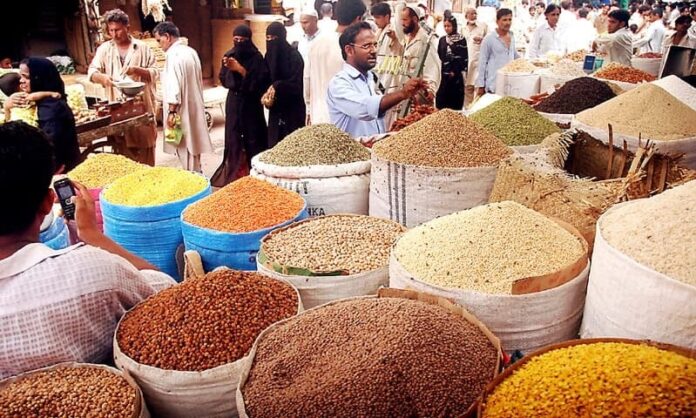 PESHAWAR: The prices of edible items remain high in provincial capital despite a record cut in oil prices and declining international rates of pulses, tea, edible oil and other essential items.

The citizens are not happy with the current pricing mechanism in the city and have criticised the district administration as well as the provincial government for their “incompetence” in ensuring lower prices of commodities across the board.

Abbas Khan, a labourer working for Rs500 a day in Peshawar, said on the one hand, daily wagers have been unemployed for the past two months due to coronavirus, while on the other hand, the ongoing inflation in the country had badly affected the poorest segment.

He noted that the shopkeepers earlier used to say that the main reason behind food inflation was “hike in the prices of POL products”.

“Despite the continuous fall in petrol prices for the past two months, the poor masses are still finding it hard to make ends meet,” Khan maintained.

Sources said the prices of rice, sugar, pulses, tea, powdered milk, ghee and oil in local markets have witnessed an increase across the province, adding that the prices of fruits, vegetables and chicken in Peshawar have also gone beyond the purchasing power of the poor.

Shopkeepers said they are helpless in this matter as it is not possible for them to buy commodities at higher rates and sell them at low prices.

“It is the responsibility of the government to keep an eye on the demand and supply of commodities. If the supply in the market is less than the demand, then the price will go up naturally,” a shopkeeper explained.

Meanwhile, consumers said that in the absence of a “price control mechanism” in the city, the profiteers are making illegitimate profits. They said the government must monitor the availability of essential commodities in the market so as to discourage hoarding and drive out those creating artificial inflation.

Talking to this scribe, Suleiman, a resident of Peshawar, said that the district administration has completely failed to control inflation and that “its performance is only limited to press statements”.

Moreover, sources informed that the traders on Ashraf Road and Milad Chowk in Peshawar have earned millions of rupees in a single day by increasing the price of flour by Rs700 per 10kg. The price of 85kg sack has gone up from Rs4,100 to Rs4,800.

It was also observed that despite a reduction in POL prices, transporters are collecting old fares. Citizens of the province have demanded the KP government and district administrations to immediately launch a crackdown on profiteering and ensure the implementation of government decisions.