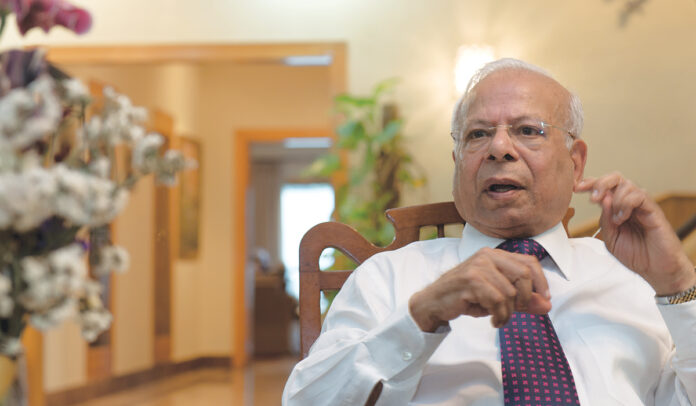 ISLAMABAD: Adviser to Prime Minister on Institutional Reforms Dr Ishrat Hussain has asked provinces and local governments to proactively engage with the business community by bringing meaningful changes in their administrative and regulatory frameworks in favour of businesses.

During a meeting of the Steering Committee on Pakistan Regulatory Modernization Initiative (PRMI) at the Board of Investment, Dr Ishrat Hussain briefed about initiatives taken for promotion of ease of doing business in the country.

He said that a sector-wise approach would come at a later stage, which would enable the country to have a deeper understanding of impediments to its competitiveness.

It may be noted that in order to reduce the compliance burden on businesses, especially those in the SME sector, the prime minister had approved the launch of ‘Pakistan Regulatory Modernization Initiative. Subsequently, a Steering Committee was established to implement the PRMI activity while the Board of Investment (BOI) was designated as the lead agency.

Over its lifetime, the PRMI activity would be implemented in a number of stages, which include the mapping of existing registrations/licenses/certificates/other permits (RLCOs), analysis for identifying unnecessary/redundant/cumbersome processes, elimination of non-essential RLCOs (also called Regulatory Guillotine), simplification/modernization of procedures relating to essential RLCOs and their automation through an online platform.

The 3rd meeting of PRMI was held on Monday under the chair of Adviser to Prime Minister on Commerce and Investment Abdul Razak Dawood. The meeting also had the Board of Investment chairman, commerce secretary, provincial representatives and other stakeholders from the public and private sector in attendance.

According to officials, the agenda of the committee was to review the progress on the decisions taken in the last meeting, discuss the developments regarding local government licensing regime by Punjab, Khyber Pakhtunkhwa & Islamabad Capital Territory, examine the steps undertaken by provinces on regulatory frameworks and get feedback from industry representatives on the regulatory impediments in different sectors.

The strategy on the way forward with an action plan and measurable milestones was also discussed in the meeting.

In his opening remarks, PM’s adviser Abdul Razak Dawood said that PRMI is a larger scale reform exercise being undertaken by the government to ensure ease of doing business in a more effective manner. “The reforms focus around reduction of compliance burden of businesses on one hand while improving the effectiveness of regulatory regime on the other.”

He underlined that the reform efforts would make life easier for the business community and improve the oversight mechanisms of the government as well.

Talking about the progress on different decisions and targets, Dawood appreciated the KP government on recent steps to simplify the licensing regime of the local government. He said that these activities would not only facilitate the SME sector but also help the growth of business activities in a more transparent and efficient manner.

The adviser encouraged all provinces and regions to adopt business-friendly initiatives of each other and increase the pace of activities to achieve concrete results for the SME sector within the given timeframe.

Different stakeholders, including industry representatives, shared their suggestions on the regulatory environment. Dawood assured that the suggestions from industry will be duly considered in order to ensure a meaningful review of the regulatory regime and introduction of consequential reforms.

At the end of the meeting, the advisor directed BOI to ensure meetings of the steering committee on a regular basis in order to fast-track the progress on different activities.

Meanwhile, Razak Dawood in a Tweet on Monday said that Chief Executive Officer (CEO) of United States (US) International Development of Finance Cooperation (IDFC) Adam Boehler would visit Pakistan next week to examine the prospects for funding of projects in the private sector.

He said this was an indication of interest being shown by the US government for investment in Pakistan.

Dawood urged the private sector firms to start developing their proposals ahead of meeting with the CEO.