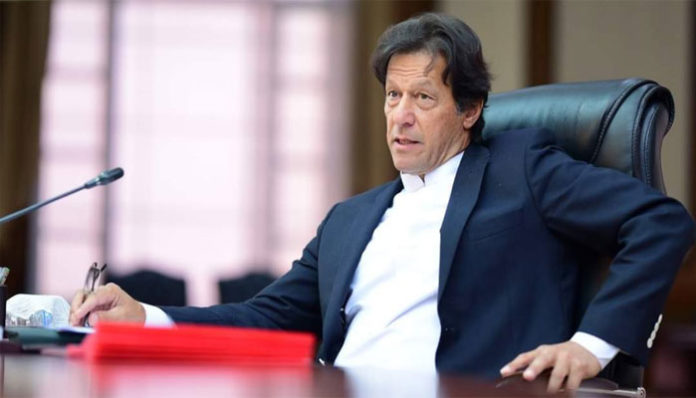 The premier’s remarks came during the groundbreaking ceremony of the Quaid-e-Azam Business Park. The park is spread over 1,536 acres of land and is located on the Lahore-Islamabad motorway, in Sheikhupura. It contains 12 different industrial zones, according to Punjab Industrial Estates Development and Management Company (PIEDMC).

Addressing the gathering, PM Imran regretted how under such a “degenerated” system, the government which should be facilitating the private sector, instead becomes an obstacle in the way. “They put up obstacles where it is absolutely unnecessary. This thinking that we must not let anyone get anything easily is inbuilt into the system.”

He said the system is such that rewards anyone who has money to spend on bribery.

The premier went on to lament how the obstacles ingrained within the country’s unnecessarily red-tape-oriented procedures are such that kill any initiatives by small and medium enterprises before they can be birthed.

“Our SMEs are our backbone. For them, the systems are so difficult that the common man, who operates on small margin, their entire initiative is ruined.”

The prime minister went on to say he has witnessed firsthand, how a common labourer, when he goes abroad, sees considerable growth within a span of a few years. “They excel there because the system allows it.”

“What is the American dream? The American dream means that whatever you dream you can achieve it. Their system rewards hard work. Our system has degenerated to a point where it is nothing but a hurdle.”

PM Imran said for the first time, Pakistan will see a removal of these obstacles in the construction and housing sectors. “There was something standing in the way at every juncture previously, whether it was the FBR or something else.”

“So this is our government’s biggest effort to give our private enterprises, businesses, industrialists the opportunity to shine and we will facilitate them.

This will take place slowly but surely […] Reformation has already begun,” said the prime minister.

He vowed that the government’s battle against this deeply entrenched system will continue.

“This Quaid-e-Azam Business Park is an excellent opportunity for Pakistan right now. “

Speaking about his visits to China, he said that every time he went there, multiple businesses showed an interest in operating in Pakistan but complained that the procedures need to be simplified.

He said that a comparison was then made with other countries and it was found that procedures in Vietnam and Bangladesh even are far better and companies are relocating there.

The premier said that now with the one-window operation in the business park, foreign companies will be looking to make an investment in the industrial zones located there.

He assured the Punjab government that the federal government is willing to provide any assistance required and told Punjab Chief Minister Usman Buzdar to contact Minister for Industries and Production Hammad Azhar if need be.

According to a statement by the Punjab government, Chief Minister Usman Buzdar said that the park will generate employment opportunities for more than 500,000 people.

“Accommodation facility for industrial workers will be provided over 200 acres of land,” he added.

He said that the project has gained great significance due to its proximity to the National Highway and Motorway.

The chief minister said that 653 industrial units will be set up in the park.

“The whole world is facing economic difficulties due to the Covid-19 outbreak but Prime Minister Imran Khan was determined to put the country on the road to economic development,” Buzdar said.

He said that for the first time in the nation’s history, a tax relief of Rs56 billion has been given to the business community in Punjab in the wake of the pandemic. Additionally, a number of small taxes have been done away with to create ease in doing business.

“Punjab Small Industries Corporation has allocated Rs12 billion for providing loans to the youth. Under this scheme, loans of Rs25,000 to Rs5 million will be given to the youth on easy terms,” read the statement.

Buzdar said that after 121 years, the second major irrigation project of Punjab, Jalalpur Canal Project has been launched and work has also begun on the Greater Thal Canal project in Punjab.

Kas Umar Khan Canal project will be started soon and Khanki Barrage has already been inaugurated.

“Under the leadership of Prime Minister Imran Khan, transparency has been ensured at all levels,” said the chief minister.

He said that more mega projects would be launched in Punjab.