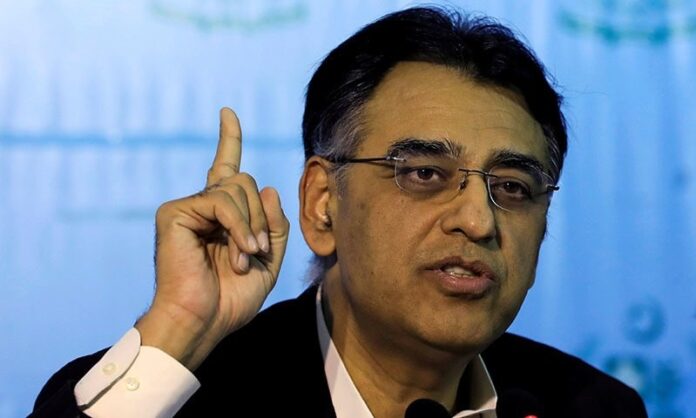 ISLAMABAD: Sharing the details of funds to be spent on Karachi uplift projects under the Karachi Transformation Plan, Planning and Development Minister Asad Umar said on Monday that Rs46 billion have been allocated for Greater Karachi Water Supply scheme.

The planning minister in a statement said that Rs300 billion have been allocated for Karachi Circular Railway (KCR), while Rs5 billion have been set aside for Green Line Bus Rapid Transport (BRT) project under the Rs1.1 trillion Karachi package announced by Prime Minister Imran Khan on Saturday.

He said that the government has allocated Rs131 billion for Railways front corridor project, whereas Rs254 billion stormwater drains clearance projects would be completed under the Karachi Transformation Plan.

Asad said that the Sindh government has expressed its desire to complete the KCR project, but it would be completed by the Centre as Railways department constitutionally comes under federal govt.

“The estimated cost of the KCR project is Rs300 billion and it would be completed by the federal government,” he added.

It is pertinent to mention here that Prime Minister Imran Khan on Saturday had announced ‘historic’ Rs1,100 billion financial package for the execution of a transformation plan meant to address the city’s issues and developmental requirements.

Briefing the media about the Karachi package at Governor House, PM Imran had said that the federal government is fully aware of the problems being faced by the people of Karachi and the government had decided to resolve all pending issues of the metropolis.

“One year & three-year plans for Karachi’s transformation have been devised as we’ve decided to resolve issues of Karachi on a permanent basis,” he said and added that the Provincial Coordination Implementation Committee (PCIC) has been formed which will monitor the implementation of Karachi Package.

Seperately, Federal Minister for Information and Broadcasting Shibli Faraz said that the recent rains have exposed the Sindh government.

Addressing a press conference on Monday, the minister said, “We do not want to give the funds directly to the Sindh government for Karachi’s development because, honestly, we do not trust them.”

He said that the provincial government had taken billions of rupees for development, however, it has been exposed during the recent rains.

The National Disaster Management Authority (NDMA), Centre, Sindh government, and the armed forces are part of the Rs1,100 billion plan to ensure its implementation and completion on time, he said.

Faraz said that of the Rs1.1 trillion package announced by the Prime Minister for development projects in Karachi, Rs611 billion will be provided by the federal government. He said that this clarification was necessary to remove any confusion on Karachi package.

Faraz said that Karachi is the economic and commercial hub of Pakistan and yearly timelines have been set for implementation of the projects under the Karachi package.

The information minister said that for the people of Karachi, the government wants to move forward with consensus and in a cordial environment.

Replying to a question, the information minister categorically stated that no NRO will be given to the corrupt elements. He said the previous governments pushed Pakistan into Financial Action Task Force’s (FATF) Grey List.

He said that it is the first time that the Centre is working for a province where the opposition rules. Faraz said that misconstruing facts has become normal for Pakistan People’s Party (PPP) Chairman Bilawal Bhutto-Zardari now, talking of which he added, “Opposition is trying to misguide the people but it’s not working any more.”

Problems of Karachi are up to the eyeballs now, he said. “Sindh government has taken loans but no development work is visible in Karachi,” he pointed out.

He asserted that the prime minister has announced a grand package for Karachi’s facelift. “Karachi is the business and trading hub of Pakistan and that its problems are now out of control,” he added.

Speaking of Karachi people and the abundance of issues they face, Faraz said that the Centre will do everything it can to address Karachi’s problems. Moreover, he asserted that the people of interior Sindh are no different and that the “federal government will indiscriminately allay their grievances as well”.

Talking about the Karachi Circular Railway, he said that the provincial government wanted to claim this project but since the KCR comes under the ambit of Federal Railways, the centre will carry out this project as well.

He also said that his government wishes to create a conducive environment to resolve the issues of the metropolis. “We do not want to get into any controversies on the matter of Karachi,” he added.

On the matter of clearing the encroachments around nullahs, he stressed that it was agreed that the Sindh government shall recompense and resettle those low-income communities whose establishments will be brought down and demolished in the clearance drive.