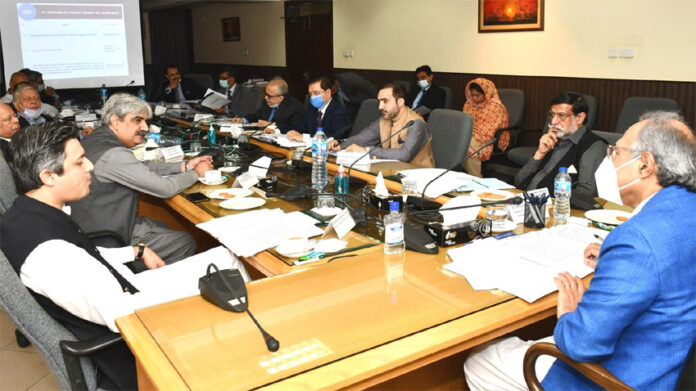 ISLAMABAD: Adviser to Prime Minister on Finance and Revenue Dr Abdul Hafeez Shaikh on Thursday constituted a subgroup, comprising FBR Policy Board members, to point out and redress the difficulties hindering the progress on data sharing between National Database and Registration Authority (NADRA) and Federal Board of Revenue (FBR).

Chairing the second meeting of the FBR Policy Board, the adviser stressed the need to establish a link between the two organisations for sharing of data and analytics.

The subgroup consists of FBR Policy Board members Hammad Azhar, Dr Ishrat Hussain, Faiz Kamoka, FBR chairman and NADRA chairman, said a statement issued by the finance ministry, adding that the subgroup would share its report with the chairman within a week.

The adviser took a special notice of difficulties faced by traders due to stoppage of containers at the Torkham border. However, he was assured by the FBR officials that necessary steps were being taken and the issue would be resolved within the next few weeks.

Earlier, FBR Chairman Muhamamd Javed Ghani briefed the adviser on the efforts the board has been making to improve the capabilities and expertise of its human resource. He also shed light on the progress made on the automation drive of FBR/Customs.

Further, the FBR chairman shared the revenue board’s future plans to improve the skill and competence of its staff through the provision of in-house and foreign training. “This will improve managerial competence and promote a culture of performance-based incentives.”

He also briefed the adviser on the work being done on the IRIS (software) to consolidate various application platforms into one, saying that the software would help improve efficiency and performance.

The chairman was further informed that a technologically advanced sales tax registration verification mechanism had been introduced, whereby officers with tablets would be sent to capture real-time information and pictures, including GPS coordinates of businesses requiring verification.

The next meeting of the FBR Policy Board would be held by the end of this month wherein ToRs of the subgroup would be presented for approval. Hammad Azhar and Abdullah Yousaf shall prepare the said ToRs.