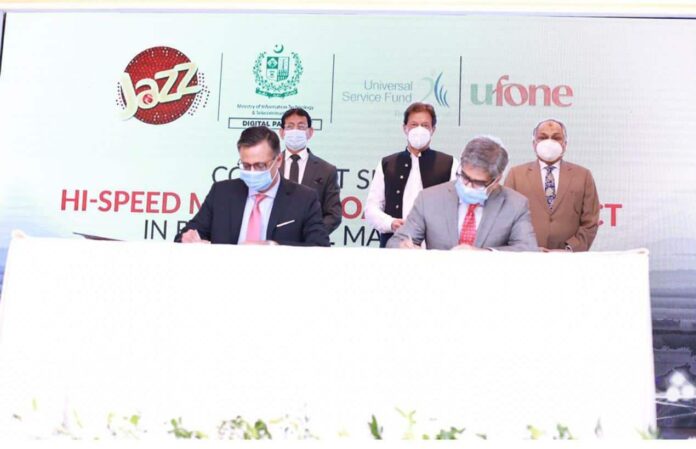 The PM said this while addressing the signing ceremony for award of Rs1.28 billion contracts by Universal Service Fund (USF) to cellular companies for provision of voice and high-speed mobile broadband data services in remote areas of Balochistan and Sindh.

PM Imran said, “Digital Pakistan is our future and by concentrating on the IT sector, we can enhance our exports. Modern technology is of paramount importance in the fifth industrial revolution. We can introduce a virtual education system in remote areas to equip our youth with knowledge and skill.”

He said the IT sector can create opportunities for backward and far-flung areas, adding, “Today’s agreement signed among USF, Ufone and Jazz very rightly conforms to our vision of bringing the less-developed areas, especially the interior Sindh and Balochistan, at par with other areas as they had been neglected in the past.”

Imran Khan regretted that lopsided development in the country had affected these areas. He said the MoU would lead to wider connectivity in these remote areas, thus paving a way for development and prosperity.

The PM cited construction of Karakoram Highway in Gilgit Baltistan, which had connected inaccessible areas and helped in improving the standards of living and educational facilities. He said that the majority of the people in those areas also want provision of e-learning and distance learning facilities through the use of mobile phone services.

He noted that Pakistan has the second largest young population in the world which possesses ‘a vibrant potential’, and stressed that the IT ministry should work further in harnessing the skills of youth.

The premier said that setting up IT parks is also a significant step by the ministry as it would have positive impact on the country’s exports.